Today's feast day reminds me of two things:
First, it brings me back to my college seminary days.  My last year of college seminary at Seton Hall University, the Rector was Father (now Monsignor) Robert Fuhrman.  Today is his patronal feast day.  He is a great man whose love for the Priesthood was a gift to the men who studied at St. Andrew's Hall during his years there.  When I graduated, I asked him if he'd be willing to preach at my first Mass (still presumably four years away).  On my breaks home from the Mount, I'd visit the college seminary (and him).  When I was ordained a deacon in 1997 at the Seton Basilica in Emmitsburg, he made a four hour drive to concelebrate the Mass, then got right back in his car to be back at his parish for Saturday evening Mass.  As I finished my years of major seminary, I reminded him of his promise to preach at my first Mass, and I think he was surprised that I still wanted him to preach (I suppose he thought that I'd find some other priest during my major sem years).  Like other relationships in life, it seems that, now, we only correspond with Christmas cards, but today is always the day that I think of him.
Second, today's feast reminds me of Rome.  St. Robert's remains can be found in the Church of San' Ignazio, which you pass as you walk between the Pantheon and the Trevi Fountain.  Part of the Roman College, a seminary run by the Jesuits where Bellarmine first taught and eventually served as Rector, used to sit on this site.  Eventually the chapel of the seminary became too small, and so this church was built as part of the expansion.  Thanks to some amateur photographers who posted their pics on the internet, here are some pictures of St. Robert's tomb and relics.  The glare spots cannot be helped; they're from lightbulbs inside the casket.  In the closeup of the mask, you can see what appears to be a part of St. Robert's skull. 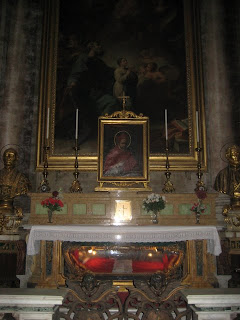 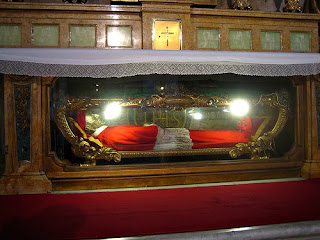 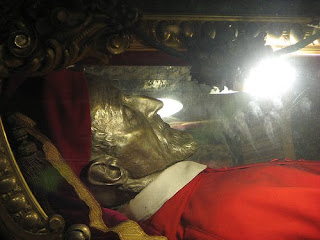 Last January, when I led a group of past & present parishioners on a pilgrimage to Rome, we stopped in this church on one of my "walking tours" (a.k.a. "death marches") of the city.  It is definitely a church worth your visit, with a very famous forced perspective "trompe d'oeil" fresco on the ceiling.  Completed in 1685, it is meant to show the missionary activities of the Jesuits around the world.  In the mural, Christ sends a ray of light into the heart of St. Ignatius Loyola, which is then sent to the (at the time) four known continents of the world.  It began, actually, as a cost-cutting maneuver; the Jesuits didn't have the money for a higher ceiling or a cupola.  So they brought in Jesuit Andrea Pozzo to create height out of paint.
Wanna see it?  Click here then click on "full resolution" link just under the picture.  Realize, though, that as amazing as it looks, photos don't do it justice.  If you do get to Rome someday, look for a yellow marble disk in the center nave, even with the first pilaster.  It's the best spot to view the ceiling.  It makes you wonder, where are the artists of today to do such works?
Posted by Father Jay Toborowsky at 9/17/2008