Feast of St. Gregory the Great

This morning in the shower (I know, too much information), I remembered that I snapped pictures of the San Gregorio altar in St. Peter's Basilica.  It's one of my favorite altars, as well as one of the hardest altars, at which to say a private Mass.  Why?  It is the altar immediately to the left of the doorway, coming from the sacristy into the basilica, and as such it gets taken quickly by those who don't want to walk far.  But if you can get it, I mean, you're saying Mass over the bones of St. Gregory the Great!  Technically it's called the "Clementine Chapel".  A "chapel" even though it is not a separate room, and "Clementine" because it was built during the pontificate of Pope Clement VIII (1592-1605).  This fact is reinforced by looking above the altar, where Pope Clement's coat of arms can be found.
Anyway, here are my pictures. 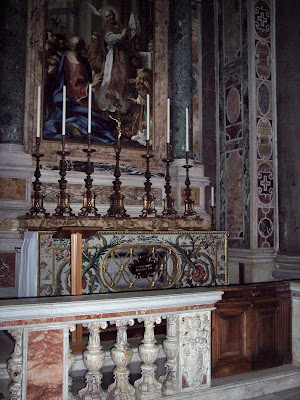 The "chapel" of St. Gregory the Great.
The mosaic above the altar was created in 1772.
It depicts the story of the miracle which took place when Pope Gregory cut into a cloth which dripped blood after having been touched to relics of the martyrs. 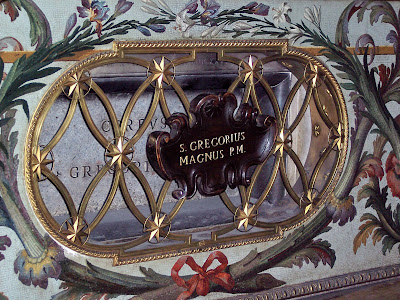 A closeup of the tomb of St. Gregory underneath the altar.
His relics were placed here in 1606.
Posted by Father Jay Toborowsky at 9/03/2008

How does something like that work in Rome for a priest who's not attached to a particular church -- do you need to schedule something ahead of time or can you just walk into a church and find an available altar and start setting up?