Today the Church celebrates the feast of St. Januarius, who is perhaps better known by the Italian version of his name, San'Gennaro. This biography comes from the website of Las Vegas' San'Gennaro Festa: 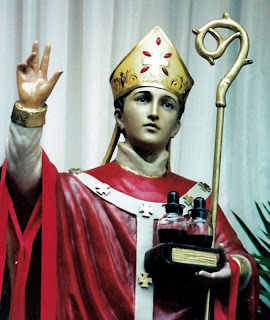 Who is San Gennaro?
San Gennaro never made headlines during his lifetime.

Very little is known about him except that he was bishop of Benevento, Italy, and died a martyr in 305 A.D., during the persecution spearheaded by Emperor Diocletian.

Actually, the zealous prelate seems to have signed his own death warrant when he risked the wrath of local pagan officials by visiting the deacons Sosso and Proculo and the laymen Eutichete and Acuzio in jail. The warden observed this stranger trying to comfort the Christian prisoners naturally concluded that he must be Christian. Therefore, he too must be shut up behind bars.

Shortly afterwards the proconsul Timothy had Gennaro arrested and clapped into jail. Subsequently he underwent various forms of torture, without wavering in his resolution to remain loyal to Christ.

The proconsul's agents then had the generous confessor of the faith thrown headlong into a furnace, fully convinced that the flames would reduce him to ashes. By the grace of God he came through unscathed. Furious, the agents gave themselves no rest until their victim had been sentenced to be beheaded.

Gennaro, who had refused to bow his head in cowardly fashion at the pagan leader's bidding, surrendered it to the steel's deathblow. His companions shared a similar fate.

The bishop's body, and severed head, still dripping blood, were gathered up by an old man who wrapped them reverently in a cloth. A good woman of Naples dried up the blood with a sponge and filled a phial with the precious red liquid. The body of San Gennaro is preserved in Naples, where he is honored as the city's principle patron.

The Miracle of the Blood
You who are reading this may have heard about it. You like thousands of believers and unbelievers alike, may have asked certain bewildering questions: How can this happen? Is there a genuine miracle of divine power involved? Or can it be explained through natural causes.

The blood of San Gennaro is contained in two glass phials of different shapes and sizes. Both phials are perfectly sealed and are enclosed in a metal case which permits them to be exposed to view. The blood in the larger phial reaches about the halfway mark; in the smaller container only a few drops are seen adhering to the bottom.

And the prodigy? This martyr's blood, which is normally solidified and of a dark color, occasionally becomes liquid and reddish, sometimes frothing, bubbling up, and increasing in volume. This usually occurs twice a year: on the first Sunday in May, the feast of the transfer of the saint's relics; also on September 19, the anniversary of his martyrdom.

This miracle of the blood; as it is popularly called, has naturally sparked no end of heated discussion and controversy. Various explanations involving the interplay of certain forces and factors have been brought forward over the years be earnest students of the phenomenon. So far, no one has come up with any clue that satisfies the general public. No one knows for sure how this liquefaction takes place at certain precise times.

Tradition has it that the prodigy happened for the first time about four decades after Gennaro's controversial death, when the relics were being removed from the catacombs of Naples. Accompanying the cortege that memorable day was Eusebia, the woman who originally gathered the martyred bishop's blood and who now carried the dark solidified mass, became a vivid, life like red liquid.

The recurrence of this marvel down the centuries, and even in our time, guarantees that the prestige which Gennaro has constantly enjoyed will scarcely diminish in the forseeable future. The loyal Neapolitans will never neglect their principle patron or trust devotion to him into the distant background.

Neapolitan Folklore
The people of Naples have reached their own conclusions about the Saint. In their opinion he is not merely a "specialist" to involve in certain situations, but a "general practitioner" to whom they can have recourse in all needs and circumstances.

They pray to him for protection from fire, earthquakes, and eruptions of Vesuvius; for preservation from plagues and droughts; in short, for all the favors and blessings they need or desire. In every emergency San Gennaro is their powerful champion and universal helper.

Each year on the first Sunday of May, the blood of their venerated patron preserved in two phials and his head enclosed in a silvery reliquary are carried on procession. The crowds wend their way from the Duomo of Naples to the Franciscan Church of Saint Clare, where the miraculous liquefaction takes place. The statues of several saints, including Saint Joseph and Saint Anthony of Padua, are likewise borne in the procession, which is often described as the procession "of the wreathed," because of the garlands used on this occasion.

The annual highlight is the solemn commemoration which the Neapolitans hold in their cathedral on September 19. Civil and church authorities are on hand, as are also vast numbers of the laity. The procession forms with the congregation singing the Litany of the Saints. When the prodigy of the liquefaction takes effect, the priest exhibits the phials of liquefied blood in full view of the gathering. A joyous Te Deum is sung and clergy and laity approach to venerate the relics of the ever-popular patron.

Nobody in Naples would care to miss that red letter event in honor of San Gennaro.
Posted by Father Jay Toborowsky at 9/19/2008