Church of the Holy Name of Mary

I just got done talking about the Feast day.  Now, let's talk about a church that bears the title of "Holy Name of Mary".
If you happen to enjoy wandering around Rome, one of the more interesting treasures amongst the churches in the city is the Church of the Holy Name of Mary (in Italian, "SS. Nome di Maria al Foro Traiano"), which can be found just on the edge of Trajan's Forum, across the street from the Vittorio Emmanuele Monument (passing by this church along its right side (see the photo) is also a great way to avoid the craziness of the traffic coming from five separate directions into the Piazza Venezia).  It's a neat church to visit, because of its relatively small size and because it is a 'church in the round'. 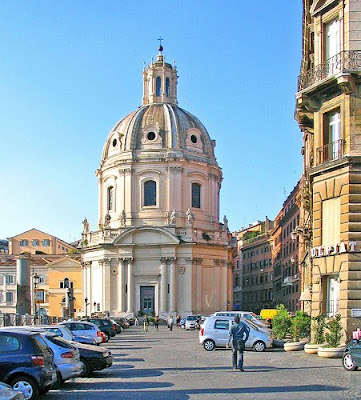 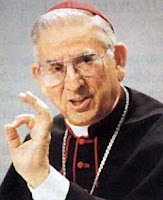 This church is the titular church of the retired Prefect of the Congregation for the Clergy, Cardinal Dario Castrillon Hoyos, a native of Columbia.  As such, his coat of arms (along with the Pope's arms, since he is the Bishop of Rome) appears above the doorway (photo below).
His is an interesting case, because it demonstrates a neat quirk in the levels of Cardinals. In 1996, JP2 named Hoyos as the Pro-Prefect for the Congregation for the Clergy ("Pro-Prefect" because he was not yet a Cardinal; the rules say that a Prefect must be a Cardinal). He was eventually created a Cardinal-Deacon in a Consistory on Feb. 21, 1998, which is the lowest level within the rank of Cardinal.  Most members of the Roman Curia, except for a select few, are created Cardinal Deacons.  Archbishops of large archdioceses around the world who are named to the Sacred College are created Cardinal Priests.  The rank of Cardinal-Bishop is reserved for the "select few" I mentioned before: seven altogether, amongst whom is the Dean of the College of Cardinals and the Secretary of State.
BUT,,,,,,,,,, The Church's Canon Law (Canon 350, par. 5 for those of you who are into this stuff) says that a Cardinal-Deacon, after ten years of serving as such, has the right to petition the Holy Father to be raised to the order of Cardinal-Priest. That's what Cardinal Hoyos did, and on March 1, 2008, he was elevated to the order of Cardinal-Priest.  Pictures from the Consistory can be seen here, on the database of Fotografia Felici.  In the meantime, here's a picture of Cardinal Hoyos' coat of arms above and to the right of the doorway of the church. 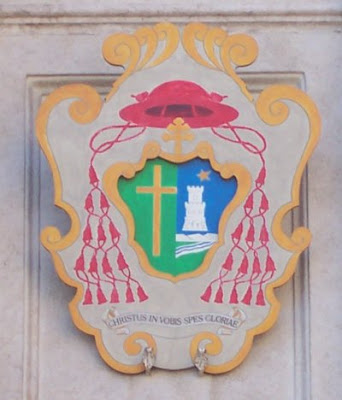