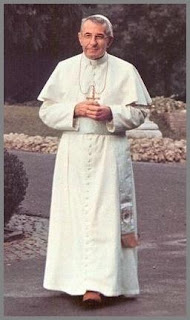 Today, like others in the blogosphere, I should write something about Pope John Paul I.  It was thirty years ago today, in 1978, that Papa Luciani died so soon after his election as Pontiff.
His election is the first that occurred in my lifetime, and, even as a non-Catholic kid, I remember the news coverage that took place as Paul VI was laid to rest and John Paul I was elected.
As a seminarian, I came to know Pope Luciani by his book, Illustrissimi, which was a collection of fictional open letters written by the then-Patriarch of Venice to people like Charles Dickens, Mark Twain, St. Bernard, King David, Pinocchio, St. Luke, Hippocrates, even Jesus himself.  They were originally published in the diocesan newspaper, before being published as a whole body of work.
One can wonder how the Church might have been different, had John Paul I lived longer.  All sorts of writers (and not a few conspiracy theorists) have opined about what he'd have done with all sorts of things, from Vatican finances to the Church's teaching about artificial contraception.  But I think about someone else: What would have become of the Archbishop of Krakow, Karol Cardinal Wojtyla?
Posted by Father Jay Toborowsky at 9/28/2008

"and, even as a non-Catholic kid"

is this the converts-club, Father? It seems everyone, myself included, is one!

I was a junior in high school seminary when Pope Paul VI died and when Pope John Paul I was elected in 1978. His short thirty day reign was still a breath of fresh air insofar as he was known as the smiling pontiff. Pope Paul VI had declined in health in his old age and after the plethora of priests who left the ministry after Vatican II and the wicked dissent of theologians like Charlie Curran et al. to Humanae Vitae, Papa Montini (P6) suffered much and it showed. JP1 brought endearment and affection to the papacy that poor P6 was unable to do. Perhaps his personality and history as a diplomat prevented him but Papa Luciani (JP1) paved the way for his successor. The affable, popular and dynamic Papa Wojtyla (JP2) became a natural successor, I think.

I was very struck by something when I read recently the collection of addresses etc given by Pope John Paul I during his short time as Pope. The Libreria Editrice Vaticana published them in a little booklet. What struck me? Many of the ideas and themes of Pope John Paul I can also be found in the early addresses of Pope Benedict XVI after his election to the Papacy.