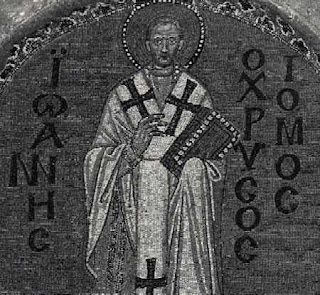 If you're looking for something "short & sweet" to read about Chrysostom, click on these links to get Pope Benedict's Wednesday Audience addresses on St. John.  He gave them on September 19 and September 26 of 2007.  Here's a great piece from one of the addresses:

It is said of John Chrysostom that when he was seated upon the throne of the New Rome, that is, Constantinople, God caused him to be seen as a second Paul, a doctor of the Universe. Indeed, there is in Chrysostom a substantial unity of thought and action, in Antioch as in Constantinople. It is only the role and situations that change. In his commentary on Genesis, in meditating on God's eight acts in the sequence of six days, Chrysostom desired to restore the faithful from the creation to the Creator: "It is a great good", he said, "to know the creature from the Creator", He shows us the beauty of the creation and God's transparency in his creation, which thus becomes, as it were, a "ladder" to ascend to God in order to know him. To this first step, however, is added a second: this God Creator is also the God of indulgence (synkatabasis). We are weak in "climbing", our eyes grow dim. Thus, God becomes an indulgent God who sends to fallen man, foreign man, a letter, Sacred Scripture, so that the creation and Scripture may complete each another. We can decipher creation in the light of Scripture, the letter that God has given to us. God is called a "tender father" (philostorgios) (ibid.), a healer of souls (Homily on Genesis, 40, 3), a mother (ibid.) and an affectionate friend (On Providence 8, 11-12). But in addition to this second step - first, the creation as a "ladder" to God, and then, the indulgence of God through a letter which he has given to us, Sacred Scripture - there is a third step. God does not only give us a letter: ultimately, he himself comes down to us, he takes flesh, becomes truly "God-with-us", our brother until his death on a Cross. And to these three steps - God is visible in creation, God gives us a letter, God descends and becomes one of us - a fourth is added at the end. In the Christian's life and action, the vital and dynamic principle is the Holy Spirit (Pneuma) who transforms the realities of the world. God enters our very existence through the Holy Spirit and transforms us from within our hearts.

Finally, someone put together a pretty comprehensive website dedicated to all things Chrysostom.  If you're looking for some of his stuff to read, you'll find it here.
Posted by Father Jay Toborowsky at 9/13/2008