Today's announcement from the Vatican that Pope Benedict has appointed American Archbishop Timothy Broglio to succeed Abp. Edwin O'Brien as head of the U.S. Military Ordinariate has been making its way around the blogosphere. So let me put me 2 Euro in the pot:

I first met the Archbishop when he was just Monsignor Broglio, one of the Priest-Secretaries to the then-Vatican Secretary of State, Cardinal Angelo Sodano. My seminary class was in Rome for a pilgrimage during Christmas of 1996, and one of the Priests who accompanied us was classmates with Msgr. Broglio at the Pontifical Gregorian University. One evening during the trip, Msgr. Broglio took us on a tour of the public rooms of the Apostolic Palace. We saw it all: from the Bronze Doors, past the statue of Constantine up the Scala Regia stairs, into the Sala Regia, and into the Sala Ducale. Absolutely amazing. But two parts of the tour were, in particular, the "kickers": 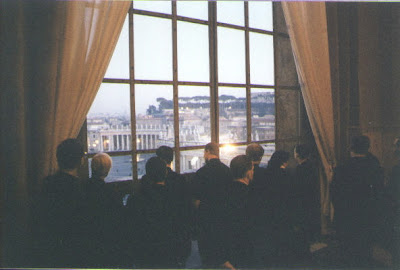 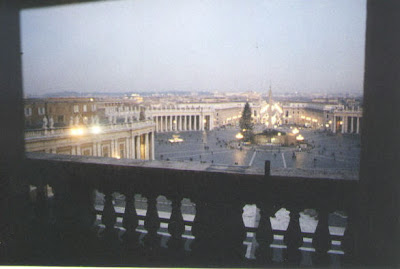 So that's my Msgr. Broglio story. Following that trip he eventually because Apostolic Nuncio to the Dominican Republic and to Puerto Rico, and now he becomes the spiritual father to our Catholic military personnel. Ad multos annos! Thanks again for the tour.

Ah; Rome. I really want to go there.

I take it you didn't study there?