I'm watching the committal ceremony for Senator Kennedy, being performed by Cardinal McCarrick.
He is reading the letter that Kennedy wrote to Pope Benedict, which was delivered by the President of the United States when they met recently. The content of the letter was previously undisclosed. He also read a portion of the letter written on the Pope's behalf back to Senator Kennedy, similarly undisclosed.
Interesting.
Posted by Father Jay Toborowsky at 8/29/2009 6 comments:

Evidently, classiness skipped a generation in the Kennedy clan. 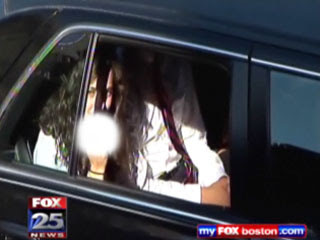 That's Rose K. Schlossberg, daughter of Caroline and Ed (and granddaughter of John F. Kennedy and Jacqueline Kennedy Onassis) gesturing out of the limosine.
Hey, maybe she was showing the passers-by how she thought Uncle Ted was "number one"?
Posted by Father Jay Toborowsky at 8/28/2009 2 comments:

Members of the Kennedy family took time to visit with the crowds lined up to attend the viewing for Ted. A classy gesture that reminds us of what every family does at a wake (even one attended by thousands of people). 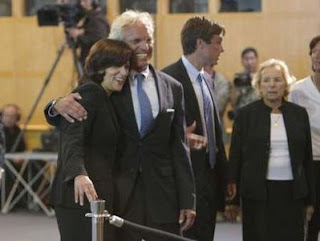 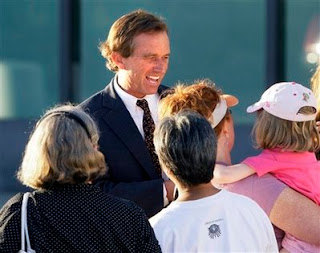 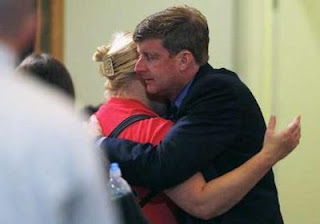 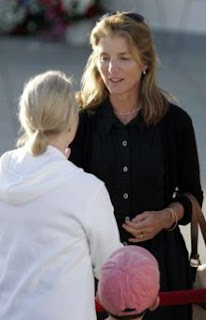 DaVinci Airport: "You can check out any time you like, but you can never leave."

From the Zenit News Service:
Italian media reported Aug. 20 that Rome’s main airport, Fiumicino, was rated the worst in Europe for delays. One in every two flights is late, and the average delay is 25 minutes.

Reasons are many and varied, but the airport blames them mostly on Alitalia, the struggling national carrier, which has had problems integrating its services with Air One (the two airlines merged earlier this year). But the problems can also affect low-cost airlines. A recent Easyjet flight ... from the airport was delayed nearly two hours because airport ground staff had suddenly fallen out with the airline, despite having signed a contract. "They just don’t like us here," the air stewardess told me. "This is what we get at Fiumicino," she said, shrugging her shoulders.
Posted by Father Jay Toborowsky at 8/28/2009 1 comment: 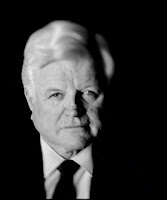 With the President on vacation and Congress in recess, Senator Kennedy's death will be THE story for the next week or so.
The tributes have been coming in. Here's one of them.
"May Christ be merciful in judging our brother Edward, for he believed in Christ as his Lord and Savior."
Posted by Father Jay Toborowsky at 8/26/2009 8 comments:

A storm blew through here last night, having its way with one of two trees alongside the church. One was taken, and one was left behind (hence the quote). 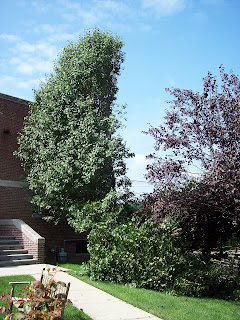 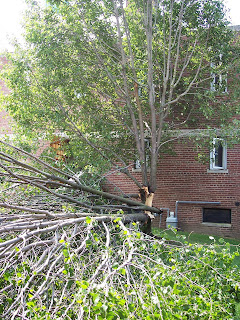 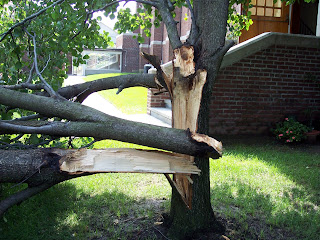 What's missing from the "Italian theme"?

Alyssa Milano married Hollywood agent David Bugliari at a rustic, Italian-themed wedding in New Jersey on Saturday, PEOPLE reports. Milano, wearing a custom gown by Vera Wang, walked down the aisle at Bulgliari's family estate with a lily of the valley bouquet. Actor Bradley Cooper, a friend of the groom, was in attendence.
"We wanted a wedding that was reflective of who we are as a couple," says Milano.

While the ceremony was traditional, the reception was designed by event planner Colin Cowie to mimic the couple's lives. Rattan chairs filled the cokctail area and hay bales served as tables for the guests. Dinner was served family-style on farmhouse tables.

"My Italian family still eats Sunday dinner together every week," says Milano. "We wanted to capture the same feeling with people passing around beautiful bowls of food and talking and laughing."

Milano, 36, and Bugliari have been engaged since December.

An Italian themed wedding? Hear anything about a Church? I hear there's a few of those in Italy.
Posted by Father Jay Toborowsky at 8/17/2009 1 comment:

Sorry I've been "off the radar", so to speak.
If you see this soon enough, I'll be a guest this morning (Monday) on Sirius and XM radio, on the Catholic Channel's "Seize the Day with Gus Lloyd", which can be found on channel 159 on Sirius Radio and channel 117 on XM Radio.
The topic is annulments, so we'll see what I get asked. I'm scheduled to be on about 9:30am.
Posted by Father Jay Toborowsky at 8/17/2009 1 comment:

Feast of the Dedication of the Liberian Basilica

...better known as "St. Mary Major" (or Santa Maria Maggiore), the location came because of a dream had by both the owner of the land atop Rome's Esquiline hill and Pope Liberius. Each year, the Basilica re-enacts the August snowfall with a cascade of flower petals. Rome Reports has this video showing the event:
Posted by Father Jay Toborowsky at 8/05/2009 2 comments:

That's when Priests get to see each other (oh, and Chrism Masses, too).
Last Tuesday, August 4, the Feast of St. Jean-Marie Vianney (C'mon, people, if we have no problem with saying, "Captain Jean-Luc Picard", we can say, "Jean-Marie Vianney"), I was down at Mount St. Mary's Seminary for the funeral of Father Robert Zylla, OSC. Fr. Zylla was a member of the Mount faculty the longest amongst his peers, being hired by then-Father Harry Flynn back in 1971. A member of the Crozier fathers, Fr. Zylla was a fixture at the Mount, always with a smiling face and a peaceful demeanor. He had been diagnosed with esophageal cancer relatively recently, and passed away on July 29 at Gettysburg Hospital. The e-mail that was sent to Mount alumni said:

"He slipped peacefully away, strengthened by the sacraments of the Church and surrounded by his priestly friends and colleagues. He entered eternal life while the priests in the room were reciting the Litany of the Saints. He had a crucifix in one hand and a Rosary in the other and at his bedside was the relic of the True Cross which he had requested to be brought from the Seminary. Fr. Brett Brannen [the Vice-Rector of the Mount] had celebrated Mass at his bedside that morning."

What a beautiful death! But just as beautiful was the gathering of Priests that attended the funeral rites on Monday evening and Tuesday morning.
Father Richard Vila, a Priest of the Trenton Diocese and fellow Mount alum, took pictures of the funeral procession. Check them out by clicking HERE.
Posted by Father Jay Toborowsky at 8/05/2009 No comments: