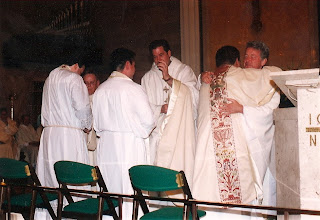 Today is the fifth anniversary of the death of Father Patrick Barrett, a Priest of the Metuchen Diocese.
When I first thought about becoming a Catholic, a friend of mine (my future Godfather) brought me to Fr. Barrett, who agreed to instruct me. On Monday nights from January to September, 1990, I would meet with him for about an hour to talk about the Catholic faith. My class "textbooks"? the Baltimore Catechism and the New Testament.
It was Fr. Barrett who Baptized me, heard my first Confession, and gave me my First Holy Communion. It was to Fr. Barrett that I first went to seek counsel about the feeling I was having that God was calling me to the Priesthood. Finally, in May of 1998, it was Fr. Barrett whom I asked to vest me at my ordination. The picture above was taken that day; you can barely make out his head on the left.
Eternal rest grant unto him, O Lord...
Posted by Father Jay Toborowsky at 5/31/2010 No comments:

This morning, members of the Laurence Harbor Fire Company and the Fire Company's Ladies Auxiliary were at the 8am Mass. It's a Memorial Day tradition.
The Mass was going fine until, just before Communion, one of our elderly Extraordinary Ministers tripped on the sanctuary steps and fell down.
She was fine, but all I could think to myself was, "Thank God we had the Fire Department here and not the trial lawyers!"
Posted by Father Jay Toborowsky at 5/30/2010 No comments:

Just some pictures from my gardening endeavors:
I bought a Gardenia plant just before Easter, and so far I've had no luck getting it to blossom. But last week it turned warm all the time and so I could put it outside all the time. Now, I've got buds on the plant. Stay tuned. 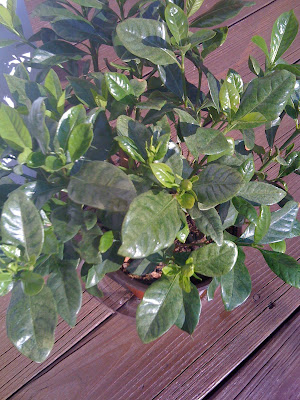 I bought these grow bags from a catalog, and this one is for herbs. I've got basil, lemon basil, cilantro, italian parsley, thyme, and chives. 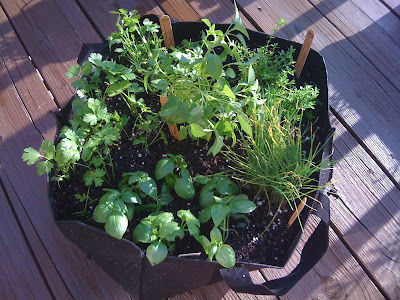 Different flowers which will eventually get placed around the back of the rectory. 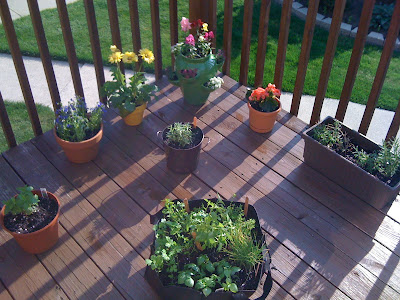 On the 2nd floor, more grow bags with tomatoes and peppers. 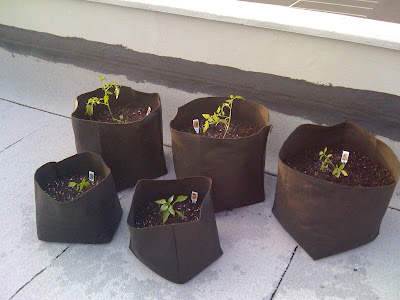 In the "it had to happen eventually" Department

From the Messenger-Gazette, a local paper in Somerset County in my diocese:

Police responded to Mary, Mother of God Roman Catholic Church on Sunday for a report of a fight in the parking lot between an usher and a parishioner after the usher told the parishioner to stop videotaping during Mass.

For the whole story, click HERE. Evidently there also was a video of the altercation(s) put on YouTube, but these have been removed.
Now, let me start with the disclaimer: I'm not assigned to this parish. I have been there twice in my lifetime, once about ten years ago to serve as Master of Ceremonies for a retired Bishop who was administering Confirmations, and nor have I ever been there, and the second time for a Priest's funeral. So I do not know the characters involved. But, that being said, let me make some general observations (i.e., tirades, rants, whatever) about such a situation.
First, about the general Catholic public. Quite honestly, the vast majority of Catholics do not know how to behave in Church. This comes from a whole variety of reasons, some because of a cultural "relaxation" of rules of decorum, and others because a deliberate attempt to remove the transcendence and mystery from the Church's doctrine. But it will not come as a shock to any Priest, Deacon, seminarian, or CCD coordinator or teacher that people who come to a Church for a Sacrament of initiation (a baptism, 1st Communion, or Confirmation) when I say that people treat God's house like crap. They are totally unaware of the Divine Presence (which is at times a monster we created by moving the Lord to some obscure spot). They've come to treat liturgy like a performance, a show. If it's only that, they they're perfectly correct in acting like a church is a movie theater in which they can sit and chat (either with the person next to them or on a cellphone) and drink Dunkin Donuts coffee whilst buying their kid's silence by feeding them Cheerios, as long as they promise to be quiet once the "show" starts. If we say something to them, then we're being "cold", "rigid", and "unpastoral". If we say nothing to them, then the few Catholics who are trying to spend some time praying get the impression that we approve of such behavior, and begin to chit chat themselves. Add to this the fact that these Catholics are, by their actions, teaching their children that this is the way to behave in a church, and you see how this weed will keep growing back.
Now, about Catholic Church ushers. For the most part, your task is about taking up the collection and handing out bulletins, and these are necessary things in the life of a parish. I also know there's times when you get asked to do the priest's "dirty work" (telling someone to sit down when all they want to do is stand in the back of church because they want the quick escape after Communion), and for that, I thank you. But, let me also say this: I don't care what you do or did as a profession, putting on the blazer does not give you superpowers. It does not exempt you from sitting through Mass like everyone else. It doesn't allow you to stand in the back of church chatting away with fellow ushers whilst Mass is going on. I have visited lots and lots of churches over the course of my years as a Catholic, a Seminarian, a Deacon and a Priest. I think there's a lot of ushers who are going to be quite shocked when God makes the delineation for them on judgment day between the Masses they "attended" and the Masses they were merely "at".
I'm sure this will become a thing that involves police, lawyers, a lot of yelling, and very little will be remembered about the children who received the Sacrament of Confirmation. There's no way to "punish" this family for their behavior, since in all likelihood they aren't Mass goers and won't be back in church next Sunday.
Posted by Father Jay Toborowsky at 5/24/2010 5 comments:

I mean the person, not the city. I've never been to St. Paul, and it might be nice, but I'm talking about the person. But I digress.
We're almost done reading the Acts of the Apostles as our first readings at weekday Masses. In today's reading, he owns the Sanhedrin by causing an implosion over the question of life after death in Judaism.
Meanwhile, he owns the Romans by pulling out his "ace in the hole": Paul is a Roman citizen. And, not just one that bought their citizenship after being a slave or a soldier (that was impressive enough). He was a Roman citizen by birth, which was the "elite class" of citizen. Just before he is about to be scourged, he drops the "C- bomb" on them, which gets the soldiers to back off and treat him with a little respect. Now, instead of seeing their priority as keeping order in Jerusalem, they now see their priority as keeping Paul safe from harm.
You've gotta love St. Paul, fighting a two front war and winning both.
Posted by Father Jay Toborowsky at 5/20/2010 No comments:

Another gift idea for Priests

These three panels are 20x20 each, and are available from a place called copiart, which I saw in a mall kiosk in San Diego. $170 dollars for the three of them.
Posted by Father Jay Toborowsky at 5/17/2010 1 comment:

The Governorate of Vatican City State and Telecom Italia have announced the signing of a contract for the installation of the first nucleus of the "Integrated Communication Infrastructure for Vatican City State". This consists in a broadband IP network capable of voice, data and video transmission within the territory of the Holy See and Vatican City, according to a communique published today.
The plan includes, among other things, fibre optic cable links between the ten main extraterritorial sites including the Pontifical Villas at Castelgandolfo and the radio stations in Santa Maria de Galeria.

When I was first ordained, I started subscribing to the weekly English edition of L'Osservatore Romano, the Vatican newspaper. It's a bit expensive ($129 a year), but realize you get 52 issues so it comes to about $2.50 an issue.
In honor of the Year for Priests, they're running a special for new subscriptions for Priests, where you get 20% off (so it comes to about $103).
This time of year, people are looking for gift ideas for newly ordained Priests or Priests celebrating anniversaries, retirements, transfers, etc. But hurry, the offer ends at the end of June.
Here's an idea. 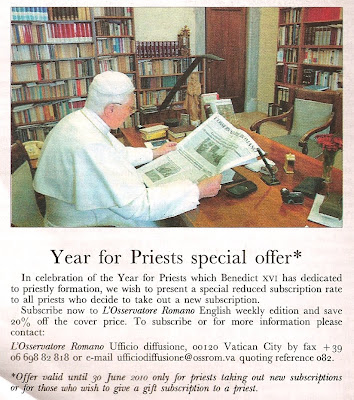