At the beginning of Lent, on the first Sunday, the Gospel reading told us of the Devil's temptations of Jesus: "Turn stones into bread", "Throw yourself off the parapet", and "Worship me and these Kingdoms are yours".  Jesus fought them all, and won, and the Devil went away "for a while".

Today, in the Gospel passage about the Last Supper, we can see that the Devil is back.  He is a cunning fighter, and this time, he's not going after Jesus, but rather those close to him: namely Judas and Peter.  It's the next step in the battle against Christ; if the Devil can't hurt Jesus, he can certainly hurt those around him.  And yet, Jesus is not defeated, because he sees beyond the battles to the whole war.

The word that ties both readings together is "glory".  Isaiah tells the story of the servant sent by God to restore glory to Israel.  Jesus is about to be beaten, humiliated, tortured, killed, and yet glorified.  Neither will be easy.  It's not easy to be a Catholic, if all we want is a good time.  But glory is found in the fight, even when popular opinion is against us.

Look at how Facebook is inundated with these equal signs, showing support for same-sex marriage.  Who can be mad at an equal sign?  It's the perfect symbol, though my inner math-geek says the congruent sign would be a more accurate logo.

To some extent, the gay community has a valid argument.  But not so much because the love of 2 men or 2 women can be exalted as a "marriage"; their argument has validity because more and more today, many marriages between a man and a woman have such lowered expectations and are so watered down, so superficial, and so non-committal that they may as well be civil unions.

The Scribes and Pharisees were the moral compasses of their time; their elite class claimed to show Judaism how one was to live in right relationship with God.  Then along comes Jesus, who challenges their authority and begins to poach at their flock with talk like, "You have heard it said..., but I say to you... ".  You can bet those who abandoned the Pharisees in favor of Jesus were called all sorts of names: "traitor", "hater", etc.

Feeling down because you're not willing to change your Facebook profile picture to an equal sign?  You're not alone.  Peter is the perfect patron saint of caving into the crowd's whim, just to get them off your back. Judas, though, he's got more to answer for.  He's not only doing what the crowd wants; on the inside, he has come to think that it's the right thing to do.  Only after the fact, when the deed is done and realizes both what he has done and how it cannot be changed, does he despair of his choices to the point of suicide.

Holy Week continues, and the time for Jesus' Passion is getting closer and closer.  Will we stay or will we run?
Posted by Father Jay Toborowsky at 3/26/2013 No comments: 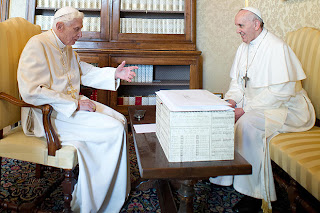 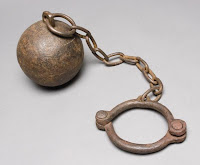 Jesus said, "Everyone who sins is a slave to sin".  Imagine sin as one of those leg irons with the lead ball at the end.  That's what sin does to us: weighs us down, keeps us from moving freely.  Some people have so many of those irons on, they can hardly walk.  Some have been walking with one of those things on their leg for so long they have forgotten it's there and come to believe that's as fast as they can walk!  How many have let pride stop them from coming to Confession to get the chain broken?  What was that song from the Eagles?  "So often times it happens / that we live our lives in chains / and we never even know we have the key."
Posted by Father Jay Toborowsky at 3/20/2013 No comments:

We know we're getting close to the end of Lent because the tones of the Gospel readings have changed.  At the beginning of Lenten season, the readings' themes were things like prayer, mercy, forgiveness, humility, almsgiving, etc.  Now, especially in this past week, the Gospels are confrontational.  All this week we've read the confrontation between Jesus and the Scribes and Pharisees.  "Who do you think you are doing this healing on the Sabbath?"  Who is he?  He is the Son of God, only you can't see that.

Now, in today's Gospel, we see them continuing in their anger, trying to get the Temple Guards to do their dirty work.  They find something to hang on to: The Scriptures say the Messiah will come from David's family and from David's town of Bethlehem.  Now they feel justified in not becoming followers; now they feel good about themselves, all over that one fact.  Why didn't anyone in that crowd say, "Let's go ask him where he came from"?

Nicodemus diffuses their momentum by asking, "Do we always condemn someone without hearing from them first?" He is one of those great characters of Lent through whom we see a progressive conversion.  In the 3rd chapter of John, he sees Jesus at night, not wanting to be seen publicly with Him.  Here he is now willing to give him the benefit of a doubt, but still won't publicly support Him.  Finally, Nicodemus comes totally to Jesus in Passion account of Good Friday, how Nicodemus joins Joseph of Arimethea in caring for the Lord's body, bringing with him costly spices to anoint His body and helping lay Him in the tomb.

When I was a child, our neighbor had an angry dog.  But there was a big chain link fence between my yard and the dog's yard, so I knew the only thing the dog could do to me was bark at me.  Some Catholics have decided to stay on the other side of the fence, far away and uninterested from the Church.  More than a few like to straddle the fence, close enough to jump in if they want something from the Church, but also positioned far enough that they can jump away if the Church asks something from them.  Lent is the time to jump inside the fence, because that means I'm forced to deal with the dog I've been avoiding for all this time.