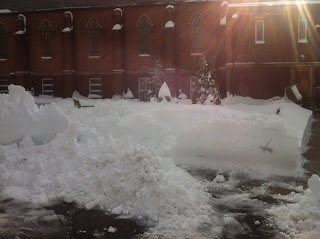 I apologize for my sporadic blogging. Lately my time has been taken up with shoveling and my new one: shaking wet snow from the branches of trees so they won't snap and kill the tree.
Posted by Father Jay Toborowsky at 1/27/2011 1 comment:

A former Canon Law professor of mine brought these canons to my attention. If you're a Priest, read 'em. If you're not, copy them and send them to your parish Priests. I'm thinking of taping them to my bathroom mirror so I read them every morning.
Can. 528 §1. A pastor is obliged to make provision so that the word of God is proclaimed in its entirety to those living in the parish; for this reason, he is to take care that the lay members of the Christian faithful are instructed in the truths of the faith, especially by giving a homily on Sundays and holy days of obligation and by offering catechetical instruction. He is to foster works through which the spirit of the gospel is promoted, even in what pertains to social justice. He is to have particular care for the Catholic education of children and youth. He is to make every effort, even with the collaboration of the Christian faithful, so that the message of the gospel comes also to those who have ceased the practice of their religion or do not profess the true faith.
§2. The pastor is to see to it that the Most Holy Eucharist is the center of the parish assembly of the faithful. He is to work so that the Christian faithful are nourished through the devout celebration of the sacraments and, in a special way, that they frequently approach the sacraments of the Most Holy Eucharist and penance. He is also to endeavor that they are led to practice prayer even as families and take part consciously and actively in the sacred liturgy which, under the authority of the diocesan bishop, the pastor must direct in his own parish and is bound to watch over so that no abuses creep in.
Can. 529 §1. In order to fulfill his office diligently, a pastor is to strive to know the faithful entrusted to his care. Therefore he is to visit families, sharing especially in the cares, anxieties, and griefs of the faithful, strengthening them in the Lord, and prudently correcting them if they are failing in certain areas. With generous love he is to help the sick, particularly those close to death, by refreshing them solicitously with the sacraments and commending their souls to God; with particular diligence he is to seek out the poor, the afflicted, the lonely, those exiled from their country, and similarly those weighed down by special difficulties. He is to work so that spouses and parents are supported in fulfilling their proper duties and is to foster growth of Christian life in the family.
§2. A pastor is to recognize and promote the proper part which the lay members of the Christian faithful have in the mission of the Church, by fostering their associations for the purposes of religion. He is to cooperate with his own bishop and the presbyterium of the diocese, also working so that the faithful have concern for parochial communion, consider themselves members of the diocese and of the universal Church, and participate in and sustain efforts to promote this same communion.
Posted by Father Jay Toborowsky at 1/19/2011 1 comment:

Let it snow (just not on a shopping day)

Weather is an amazing thing. One week ago I could look out my window and we were in the midst of an honest to goodness blizzard. One week later, and most of the snow has melted, the streets are clear, and the only people who are still cranky are New Yorkers (No surprise there; They're always angry about something).
Lots of criticism has been thrown at Gov. Christie for not being in the state to personally drive a plow across the thousands of square miles of our state. But who is really to blame, and what are people really mad at?
If you want to be mad at something, be mad at the blizzard. This was a major storm: lots of snow, high winds, temperature below freezing. But, hey, NEWSFLASH: IT'S WINTER! This is what is supposed to happen. Want to get me nervous? Give me a blizzard in August.
Let's go back to the Governor. Does the State regulate snow plowing? Should it? Of course not. You really want the question of whether your street deserves attention being made by someone who doesn't live in your town? You want someone staring at a map down in Trenton who can order your town's snowplows to the other side of the state? GOVERNORS DO NOT CONTROL SNOWPLOWS; MAYORS DO! The one thing State government has right is that it knows that local towns know their streets better than the State does. Here's a question worth asking: Thanks to the press, everyone knows Gov. Christie was on vacation when the storm hit. But do you know whether, between Christmas and New Year's, your town's mayor was around? Heck, we had a major blizzard along the east coast, affecting 4-5 states, our President was in Hawaii, and everyone seems to be fine with that.
So why the anger? Comfort. We don't mind being told we have to stay inside for a snowstorm. But, whether there is three inches or three feet of snow, we want it all cleaned and pretty so we can get back to our usual lives the very next day. C'mon, it's after Christmas! We've got gifts to return, giftcards to cash in, and supermochafrappalattes to suck down at the mall.
Most Priests try to take a little break following Christmas, and the blizzard did squash many a travel plan (clergy included). And, though I have gone away in the past, I had no such plans this year. But I have to say this: from Sunday afternoon until about Tuesday evening, I had a very relaxing post-Christmas rest, right here in my Rectory.
For that, I say, if you really are to blame, then "Thank you, Governor Christie".
Posted by Father Jay Toborowsky at 1/02/2011 1 comment: