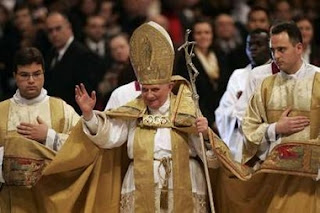 I just got done watching EWTN's repeat broadcast of the ceremony from Rome for the creation of the new Cardinals. I love "Church things", but getting up at 4:30am to watch it live is too much. Although now that I think of it, I suppose getting up at 4:30am to watch Pope Benedict create new Cardinals is the ecclesial equivilent of getting up at 4:30am to be at some store when it opens at 5am the day after Thanksgiving for some Christmas shopping! Besides, I was there in St. Peter's Square when Pope Benedict made the announcement, thangyaverymuch. I even got myself a copy of L'Osservatore Romano that evening (the next day's edition always comes out in the late afternoon of the day before) with the announcement of the nuovi Cardinali from the kiosk along the right side of the colonnade, complete with their names in their order of precedence. That was the second time I was there when Pope Benedict announced his creation of new Cardinals, the other being a Wednesday audience on the Feast of the Chair of Peter back in 2006. I'm always there for the announcement, but never the actual Consistory. Oh well, what do they say? "Always the bridesmaid..."

However, at the last minute with fears of an impending downpour, the ceremony was moved from an outdoor event in the Piazza San Pietro, to inside the basilica itself. Kudos to those who made such a change at the last minute seem so flawless (on television, anyway). I understand that there was no way to fit everyone in the square into the basilica, and so many people watched the event on the jumbotron monitors placed throughout the square (if only Bernini could see his square today). But anyone who has been invited to a high school graduation knows there's always that chance that a June thunderstorm will move the ceremony into a cramped gymnasium without advance notice. Romans have a great attitude about such things: they show contempt, then shrug and deal with it. But I can imagine the "wails and gnashing of teeth" that must've been coming from the foreigners who came specifically to watch that event. Especially, I'm thinking of the Americans, because we can have a sense of, "How can something like this happen to someone as important as ME?" I mean, put yourself there: The announcement has been made that the ceremony is moving indoors, and each Cardinal can have, let's say, 125 tickets to gain someone entrance. Who gets in? More importantly, who doesn't get in? Here I'm also thinking of my brother Priests, because some of us can get awfully cliquish and elitist when we want to be. I'm sure there were plenty of clergy who said, "It's OK, give my ticket to someone else." But I'm sure there were also plenty who said, "I HAVE to be there. Don't these people know who I am? How many committees I'm on? If I'm not in there, what will people say about me?" Hehehehehe, ah, the "high school lunchtable drama" of it all.

Getting back to the ceremony, it was nice to watch Cardinal Foley receive his biretta. I've met him a few times through his work for the Pontifical Council for Social Communications and my work in radio. He was even kind enough to come on my show as a guest. I saw him last month during my Rome visit, and he was kind enough to sit and chat for about a half hour at the headquarters for the Knights of the Holy Sepulchre. He never let on that he was about to be named a Cardinal, though I'm sure by then he knew it was going to happen. He put in a lot of years in service to the universal Church, and his creation as Cardinal is a well-deserved reward for his work (despite the fact that some bloggers are acting as if it's something "long overdue"). Congratulations to him, as well as Cardinal DiNardo. I wonder if Stetson makes a hat in red watered silk?

Check out the link in my blog for pictures of the Phillies biretta made by some friends in Philadelphia.
www.maxiesmom.blogspot.com