Obama at Notre Dame: What if? 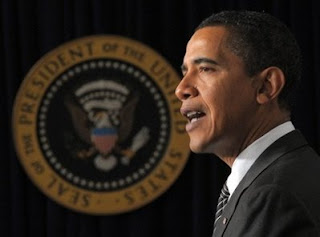 Yes, the Catholic world in the United States is in an uproar about Notre Dame giving an honorary degree to perhaps the most pro-abortion President that the United States has ever had.
It's the latest move in a "chess game" that's been being played in the United States for years, perhaps even decades.  The title at stake: Catholic.  What does it mean to be a Catholic? Who gets to call themselves Catholic?  The game started back in 1968 with Humanae Vitae, and still goes on today.  It comes down to the question of whether a Catholic can hijack Our Lord's words, "You have heard it said ..., but I say to you ...", when it comes to dissent from Church teachings.
Now, what can happen here?  Notre Dame can change their mind. Bishop John D'Arcy of Fort Wayne-South Bend could forbid it to happen within his diocese.  Archbishop Sambi could, in an unbelievable coincidence, happen to have his car break down in front of the Main Building, and ask to use the phone in Father Jenkins' office (whilst Father is still in there).
Would the President be offended if Notre Dame rescinded their invitation?  Probably not. The White House, better than most others, understands that symbol trumps substance when it comes to images. If you don't believe me, ask yourself why there's no photo ops with the President and Rush Limbaugh?  If the university wants to award the President an honorary degree, they can certainly do so in the Oval Office.  Alumni can make their feelings known to the Notre Dame administration about that.
But what if a few other possibilities occurred when the President steps onto the campus in South Bend:
Yeah, I can dream, can't I?
Posted by Father Jay Toborowsky at 3/24/2009

Yes, Father, you can dream! Funny, but that's exactly what I have been praying for and will continue to do so until our collective faith reaches the size of a mustard seed.

An actual discussion about life issues? And a conversion of heart? Wow, a dream sequence surely.

But then, I do believe in miracles, and I do pray!

That sure does sound like a good dream.
I can dream too. And we can ALL pray.

Well, St Paul was miraculously converted! Hmmm should I pray that Obama is suddenly struck by lightning? God's Will be done!

It would be nice indeed if President Obama's views on abortion changed. I don't believe any Christian leaders were ever able, however, to change George W. Bush's view on the death penalty (nor was John Paul II able to dissuade President Bush from rushing into an elective war). Both men seem to hold to their own views on these life issues. But yes, we can and should pray.