On today's feast day, it's worth repeating the connection between the Drexels and Jackie Kennedy.
Katherine was the child of Francis Drexel and Hannah Langstroth Drexel.  Katherine's mother, Hannah, a Baptist Quaker, died only five weeks after Katherine's birth on December 30, 1858.
One year and four months later, on April 10, 1860, Francis remarried, this time to Emma Bouvier at Old St. Joseph's Church, a Jesuit parish not far from Independence Hall.  Emma (1833-1883) was one of eleven children of Michel Bouvier and Louise Vernou Bouvier.  One of Louise's younger brothers was John Vernou Bouvier (1843-1926), whose son, John Vernou Bouvier, Jr. (1865-1948) had a son, John Vernou Bouvier III (1891-1957).  This was "Black Jack" Bouvier (called so because of his perpetual tan and flamboyant lifestyle) who had two daughters, Caroline Lee and Jacqueline, whom the world would eventually know as Jacqueline Bouvier Kennedy Onassis.  This would mean that Saint Katherine Drexel is the great great great step-aunt of Caroline (Kennedy) Schlossberg.
There is no relation, however, to Patti and Selma Bouvier. 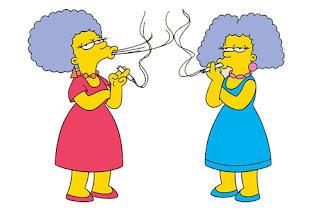 Me thinks you have too much time on your hands.

Nah, this research took all about 20 minutes. A great book that helped is entitled, Katherine Drexel, A Biography, written by Sr. Consuela Marie Duffy, SBS (a friend and companion of St. Katherine in her later, infirm, years). That, and Wikipedia, did most of the work for me.