Another first: a run-in with a Capuchin

Another first in my life.  No, not with the Franciscan kind (though I've had my share of those).
My day off last week was uneventful.  I really didn't have anything planned, and so I ended up taking a ride out west to Peddler's Village. On the way back, I stopped at a French Bakery on the Delaware that makes these great sandwiches on baguettes baked right there.  I was in heaven, or rather le ciel. 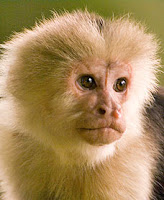 As I'm waiting for my sandwich, a man comes in with a monkey on his shoulder, a Capuchin Monkey.  Five other people in the shop - a mother and son sitting at a table, an elderly couple looking at the cakes behind glass, and the owner himself - aren't looking the least bit excited or phased. I mean, there's a FREAKIN' MONKEY in the store.
Oh, and the monkey is staring at me.
You think he reads the blog?
Posted by Father Jay Toborowsky at 3/20/2009

Was it any relation to that ape in CT?

Last time I went to Home Depot, a lady was in there with a HUGE parrot. Again, no one batted an eye.

If he's a smart monkey he's reading your blog!!