Yesterday, my day off was spent in Philadelphia.  A Priest-friend of mine was visiting the city; He and I have both been there before and seen the mainstays of Catholicism: the Cathedral of Sts Peter & Paul and the St. John Neumann Shrine.  So I did some digging, looked at biographies of Neumann and Drexel, and picked the brain of my friend and former Church history professor, Father Michael Roach.  Having my list, my friend and I spent the day visiting some of the other interesting "Catholic" places that are worth a visit if you are in the city of brotherly love. 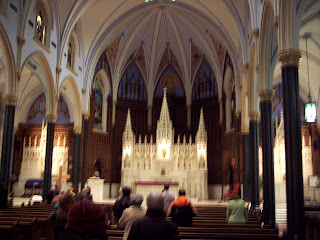 Our first stop was St. John the Evangelist Church, also known for a time as St. John's Pro-Cathedral, located at 21 S 13th Street (near City Hall).  As a young Priest, future Archbishop John Hughes was its founding pastor, naming the parish for his patron saint, in 1830.  Hughes had been an emigrant from Ireland in 1817.  His studies for the Priesthood took an unconventional route.  Unable to pay his way, he found a job as a gardner at Mount St. Mary's College in Emmitsburg, Maryland, eventually went to the college and seminary there.  Ordained to the Priesthood in Philadelphia in 1826, Hughes would leave 12 years later after being named coadjutor of New York (It was during Hughes' tenure that "Bishops" of New York because "Archbishops" of NY).  But back to the building.
Starting in 1838, St. John's served as the cathedral for the Diocese of Philadelphia.  Bishop Francis Kenrick had begun construction of a newer, bigger cathedral (the future Sts. Peter & Paul), but the building would not be completed until 1864.  When St. John Neumann was installed as Bishop of Philadelphia in 1852, it was at St. John's.  When Neumann died in 1860, one funeral Mass took place here, and another at the Redemptorist-run St. Peter's church at 5th and Girard (the current site of the Neumann Shrine).  Neumann had been a Redemptorist.  Today St. John's is served by Capuchin Franciscans. 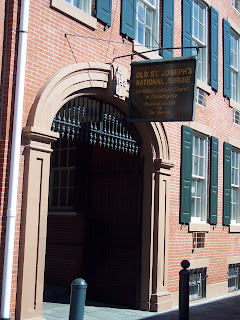 Next we walked down Chestnut Street, past Independence Hall, making our way to Old St. Joseph's Church at the
intersection of 4th and Walnut.  Founded in 1733, this was the first parish in Philadelphia, having been established by the Jesuits (who still serve the parish).  It was from this "home base" that Jesuit Priests travelled throughout New York, New Jersey, Delaware, and western Pennsylvania, in order to provide the Sacraments for the Catholic families that lived there.
Down the block from Old St. Joseph's is Old St. Mary's Church, located at 248 S. 4th Street.  This was Philadelphia's second parish, built in 1763 by the Jesuits as a bigger church for Sundays.  St. Mary's is rich in American history: 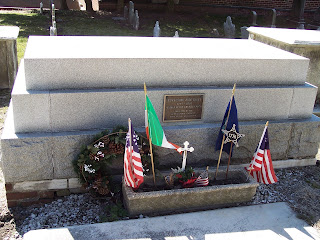 Around the corner from Old St. Mary's is Holy Trinity Church, built in 1789 for the Sacramental needs of German speaking immigrants; the first "national" parish.  It's located at the corner of 6th and Spruce Streets.  Unfortunately the church is closed during the week, so we couldn't get a peek inside.
There were other spots that I found that, though weren't really places to visit, come under the category of "it happened on this spot" places:
As summer approaches, Philadelphia is definitely worth at least a day trip.  But bring good, comfortable shoes for your day.  Nothing was as nice as my train ride home, crossing back into the Garden State with those warm words of welcome...

I love the St. John Neumann shrine. I went there many many years ago as a small child and I still have the relic that I got then - over 40 years ago.

I went there when i was pregnant with my son. At the time the shrine was under renovation and it was relocated to the church. A certain calm came over me and I knew that I would deliver a healthy child (although there was no hint that he would be a red-head). Of course, this calm was followed by tears.

I took my son there the summer before sixth grade and he was so taken by the shrine that he chose John as his confirmation name that fall and St. John Neumann was the patron (even though his name is John). We had a wonderful seminarian conduct our tour and my son was glued to his every word.

It is a wonderful place and I also love the area dedicated to St. Gerard.

It's a wonderful city full of history and excitement. And not nearly as crowded or busy as NYC!

Hi,
This is very interesting blog . I just wanted to say thanks you for writing and giving your knowledge to such an informative helpful blog.
So thanks!
Scholarship

Nice blog have added you to my links..

Having lived in Trenton for a bit some years ago I can let you in on a little local lore. It is rumored that the unlit part of the sign on the Morrisville bridge says "what the world abuses Trenton uses".