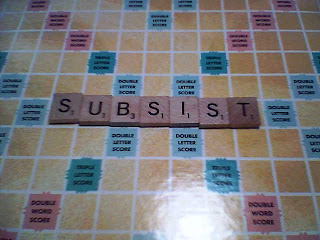 (Photo by Fr. Jay, his cellphone, and his Scrabble game)
Much has been written in the media and on the blogosphere about the recent document issued by the Congregation for the Doctrine of the Faith (or "CDF" if you want to sound like you're "in the know"). Of course editors are running headlines like, "Pope Says Protestants Defective", or, "Other Churches Not Churches, According to Pope". It amazes me how many people's attention spans have gotten so small that they can read about 5 sentences and presume they know the whole story.

A related story: Two years after I was ordained, I attended the annual convocation for the Priests of my diocese. A month or so before the convocation, the CDF issued Dominus Iesus, a document on the nature of the Catholic Church. At one point, during a Q&A session, a brother Priest made some kind of disparaging remark about the document which showed he hadn't read the document; he prided himself on having read what appeared in a secular newspaper about the document. I couldn't let that go; if this was what he was saying to a room full of clergy, what was he saying to his parishioners? By 2000, the internet was pretty well established and certainly everyone in that room knew that the Vatican had a website which made Church documents readily available. I politely reminded my brother that the document was simply reiterating what Vatican II taught: that Jesus Christ established a Church and that Church subsists within the Catholic Church, and rather than criticize what he hadn't read, he could download the document and read it for himself.

So, to help you be a better informed Catholic, here's some links to help Young Fogeys answer those questions we're going to get from non-Catholics, anti-Catholics, and perhaps more than a few "just plain Catholics":