Some Random Thoughts After Morning Mass

For those who think the Holy Father's recent Mot -- (nope, I said I wasn't going to write those words any more) -- his recent M.P. on the '62 Roman Missal has been "the worst" in terms of reluctance towards its implimentation, I'm here to say it's not so. The resistance that Summorum Pontificum faces will pale in comparison to the whines, complaints, "pastoral concerns", wailing and grinding of teeth, and general tempter tantrums and meltdowns that we will experience when Rome eventually issues the new English translation of the Mass that the Vox Clara Commission has been working on for the past 3-4 years. Remember a few years ago when we had one or two external changes to the General Instruction on the Mass (eg- to stand before the "Pray, brethren...") and a bunch of internal changes (eg- Ordained persons should be the ones to purify Sacred Vessels, etc.)? Well multiply that squall exponentially and you get the picture of the storm to come.

I say this because, as bits and pieces of the draft documents on the new English translation have leaked out, we've heard complaints that people aren't used to words like "consubstantial" (which will be part of the new translation of the Nicene Creed). This particularly hit me as I heard the Responsorial Psalm at Mass this morning, which had the line, "Who split the Red Sea in twain, for his mercy endures forever;" Maybe I'm uncultured, but I rarely use the word, "twain", in my everyday conversations. But you know what? I heard it, I understood its meaning, and my life moved on. I didn't leave the Mass bewildered and excluded. I mean, the Pople of God spend thousands of dollars each year on books and tutors so that their teen-aged children will learn vocabulary words that are waaaaaay out of their everyday conversational range, all in an effort to get into the college of their choice, and no one seems to resist that idea.

Now, on another topic, I do have a complaint, and that's this: What's with all these people I've been seeing lately dressing in long black robes and speaking Latin? Long black robes? That's old and outdated! And Latin? It's a dead language! No one under the age of 60 even remembers it! It won't appeal to young people or be relevant to them. They won't be interested. 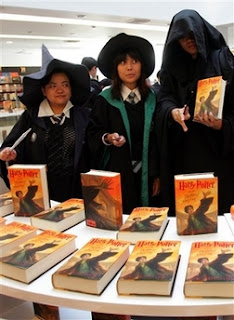 Oh yeah, waitaminute, that's right. It wasn't at a church, it was in the crowds buying the new Harry Potter book. Check this out to see where words like "expelliarmus" and "expecto patronum" originate. Thanks to the AP for the photo.
Posted by Father Jay Toborowsky at 7/21/2007

I agree with you about the English translation of the Mass. Our language needs 'resacralising'.

Just like with 'twain', I think many will know what consubstantial means. :)

By all means increase access to the older form, as the new MP does. But remain true to the spirit of Vatican II, which taught that there must be full, active and conscious participation in the Mass by all who celebrate it, those in the sanctuary and those in the pews. Most of us are well aware that not everyone in the pews participates fully in the new form, so the challenge to those who minister in parishes will be to continue working on helping everyone understand the incredible miracle they celebrate every time they participate in the Mass, whether that of 1962 or that of 1970.

Expecto patronum, indeed. Yeah, none of the younger people care for Latin. Unless, like a Patronus, we can use it to dispel the dementors of the "Spriit of Vatican II".