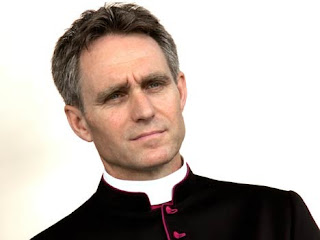 The German newspaper Sueddeutsche Zeitung recently ran an interview with papal secretary Msgr. Georg Gänswein. It's an interview with great insights. Not only were there the obligatory questions about the Holy Father's recent vacation, but also questions about the early moments of Papa Ratzinger's pontificate, the Pope's daily work schedule, a hint as to why he hasn't continued Pope John Paul's custom of admitting people to morning Mass in his private chapel, reflections on the Regensburg speech last year, and even what it's like watching television with B16!

If your Deutsch ist ausgezeichnet, read the interview in its original language by clicking here. However, for those whose Deutsch ist scheusslich, thanks to Gerald Augustinus at The Cafeteria Is Closed, we have a translation auf Englisch.
(Photo by Reuters)
Posted by Father Jay Toborowsky at 7/28/2007

I found it a really interesting interview; thanks for posting it!