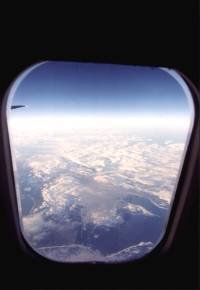 I'm back from a few days of vacation; a vacation which put me on an airplane. While I'm not the worst of "nervous fliers", I'm certainly not at ease on a plane (and the movie about snakes on a plane didn't help that at all-- thanks a lot, Hollywood). In short, if the flight doesn't go as smooth as a hockey puck on top of ice, I'm a nervous mess. Intellectually, I know that turbulence is not uncommon. Heck, even a dog knows that if you stick your face out of a car window while driving, you get a face full of wind resistance. So what do I do in anticipation of a plane flight? I bring plenty of stuff to read and some over-the-counter medication to bring about some sleep, albeit for 15 minutes a pop.

This time, thankfully, in the middle of the flight, we hit some smooth skies, and I began to pray my Liturgy of the Hours. It was then that I read these words from Psalm 148:

"Praise the Lord from the heavens,
praise him in the heights. ...
The splendor of his name reaches beyond heaven and earth."

Now in my 8 years of Priesthood, I've read those words plenty of times. But to be up in the air and looking out of an airplane window, looking down at the ground below and seeing the clouds from what must be God's perspective, the words took on a whole new beauty. Aboard that plane, I learned a lesson about how things, seen from another point of view, can look totally different.

Today's Gospel places two widows in our sights. Whenever we read about widows in the Sacred Scriptures, we must get the Anna Nicole Smiths out of our head (widows who get left loads of cash). Widows were usually quite poor, having no one to support them and no version of "Survivors' benefits Social Security" to provide any income (In fact, Acts 5:35 records one of the earliest deeds of the young Christian community as selling their personal property to provide a common fund for the relief of the needy, amongst them the widows). If they had no family to take them in, and no child(ren) who were old enough to support them, they lived from hand to mouth. So when we read that the widow of Zarephath gave the last of her oil and flour for Elijah's bread, and the widow in the Temple putting her 2 meager coins (Mark uses the Greek lepton, meaning 'thin ones') amidst the wealthy putting huge amounts into the Temple treasury, we realize they're giving all they have.

In this age when society hails Oprah Winfrey for giving away $1000 bank cards to her audience (well, Bank of America footed the bill, actually) with the condition being that the money had to be used for someone else's good along with a camera to record the good deed, we need to ask the question: Does a good need need to be known by everyone (and recorded on video) in order for the deed to be "good"?

In the end, all that matters is that we understand that, as Christians, we are called to "not only keep the faith and live on it, but also profess it, confidently bear witness to it, and spread it." (Catechism 1813), and that God Our Father, who "sees in secret, will reward [us]." (Matthew 6:6) Our lives are not television shows, and thankfully God is not some studio executive who bases our success on our popularity. In the end, we have an audience of one (well, three in One, actually).