On Tuesday I taped an interview with Fr. Joe Fessio for my radio show. He's the founder of Ignatius Press, as well as Provost of Ave Maria University down in Florida. Ignatius has three new books out, two of them by Pope Benedict, and one of them about him. This is the second time he's been a guest on the show, and it's always a great half-hour of radio when he gets going.

Of course, the coolest thing about Fr. Fessio is that, in his years of formation in the Jesuits, he studied under two of the great theologians of the 20th century. Studying in France in the early 1970's, Fessio's advisor, Jesuit Fr. Henri deLubac, suggested he write his doctoral dissertation on the writings of theologian Fr. Hans Urs von Balthasar. To do this, deLubac sent him to the University of Regensburg in Germany to complete his work under the tutelage of a German professor named Fr. Josef Ratzinger. Talk about brushes with greatness! deLubac was named a Cardinal by Pope John Paul II in 1983, von Balthasar was named a Cardinal in 1988 (but sadly died the eve before the ceremony), and Ratzinger was, well, you know the story. Fessio and the other doctoral students of Professor Ratzinger formed a Schulerkreis, a "student circle" that continued to meet with their former teacher every year in a seminar setting. With the election of Ratzinger to the papacy, they assumed the meetings would stop. But as Fessio explains it, the Holy Father wanted to keep the meetings going. Last year's seminar at Castelgandolfo discussed Islam, while the seminar this past September discussed creation and evolution.

I'm in my fourth year of hosting the radio show, and I've had some well-known guests. But Fr. Fessio is certainly in the top 5 for a little diocesan radio show. Who's my "dream guest"? C'mon, is there any question? 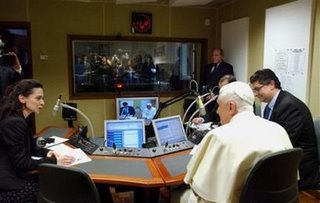