St. Paul and the New Evangelization

In his address to the Bishops of the United States last Monday, Papal Nuncio Archbishop Pietro Sambi spoke about key aspects necessary in evangelization, and said this with regards to use of the Mass Media:

"The first Catholic newspapers were born in Baltimore, where the necessity
for them was truly seen. Today, Mass media has developed enormously. Media can
cause damage, but can be used also for great good. With competent and well
trained personnel, the Catholic Church should find ways to utilize the media
more effectively for the service of the Gospel and in the service of humanity. We can only imagine how Saint Paul would have used the Mass Media of today."

Abp. Sambi is only reiterating what's been a consistent theme from Rome for over forty years. One of the Second Vatican Council's 16 documents was on the topic of social communications. 1963's Inter Mirifica called upon all members of the Church to "make a concerted effort to ensure that the means of communication are put at the service of the multiple forms of the [social communications] apostolate without delay and as energetically as possible, where and when they are needed. (par. 13)" In one of his final documents, 2005's Apostolic Letter The Rapid Development, Pope John Paul II wrote, "New technologies ... create further opportunities for communications understood as a service to the pastoral government and organization of the different tasks of the Christian community. One clear example today is how the Internet not only provides resources for more information, but habituates persons to interactive communication (par. 9)."

Young Fogey Priests take heed: The New Evangelization is here and we've got to respond. Ask yourselves how you get information and, if you're like me, it comes from television and the internet. TV time is usually far too expensive for any single person to buy, but don't underestimate the local public-access stations and their openness to air 30 minutes of prerecorded catechetics. The internet is clearly the way to go for the future, which nowadays covers everything from television (YouTube, for example), radio, and print media. 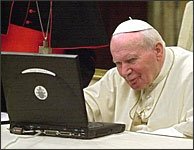 Communications in the 21st century is instant and on-demand; your average parishioner with internet access wants to know the news at any given time they choose to sit in front of their computer. Setting up a Blog is free and can be an extension of our preaching and teaching. Some parishes even record the weekend homilies of their Priests/Deacons and stream them over their parish's website. Dioceses should have their diocesan newspapers available on-line. Even secular newspapers admit a constant decline in subscribers (why? By the time the next day's newspaper hits the stands it's 'old news' in the age of the 24-hour cable news channels - people read newspapers today more for the columnists than for the columns). Parishes could have homilies downloadable for iPods (mp3 players are huuuuuuge amongst teens, college kids, and the 20-somethings) or for the worker who comes home from the 3-11 shift and checks e-mails at 2am. Who can say how many souls we can touch who don't attend Mass regularly or who can't attend Mass because of sickness or a work schedule that prevents it?

The reasons against it? It takes time and effort. It may require more thought be put into homily preparation if it's going out into cyberspace. It may mean more work, as people with questions about the faith send e-mails or people who haven't been to church in years come back. But as Archbishop Sambi called St. Paul to mind, wondering how he'd have used today's communications possibilities in his apostolic work, we can only make his words our own, "I remind you to rekindle the gift of God that is within you through the laying on of ... hands; for God did not give us a spirit of timidity but a spirit of power and love and self-control. (2 Tim 1:6-7)"
Posted by Father Jay Toborowsky at 11/16/2006