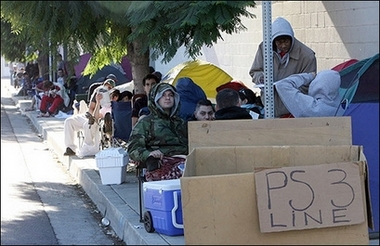 This morning, stories about the release of Sony's PlayStation 3 are filling the airwaves. For hours, lines of twenty-somethings sat outside stores in anticipation of the "privilege" of shelling out $650. to buy a game. Some did it for noble reasons (one story I read told of a woman hoping to buy the game for a younger relative displaced last year by Hurricane Katrina), while some did it for the game's resale value on Ebay (as of now around $10,000.-- Milton Friedman would be proud). But most are doing it for themselves. GenY wants PS3. What they wanted last Christmas doesn't matter; that was then. By next Christmas, PlayStation 4 might be out, and if so, this game will be old and not satisfying anymore so they'll move on.

You wonder why new vocations to the Priesthood and Religious Life are in a "crisis"? Don't blame celibacy. Don't blame the sexual abuse crisis. Blame commitment ("What if something cooler comes along? Can't I just walk away and move on?"). Blame the "instant gratification" society ("I want to use it now, while it's fun and trendy and pleases me."). Blame prosperity ("Mom? Dad? If you realllllly love me, you'll forsake paying all the utility bills for a month so you can get me this toy! John and Marys' parents got it for them; they must be loved more.").

If the "vocations well" was dry, while young people were still getting married in their 20s, then we could say the problem lies with us. But most Young Fogey Priests know the average age of couples coming to us for marriage is about 30, and with living together so widely accepted there's no reason to commit. Until we solve the puzzle of how to make young people understand the permanent commitment (in good times and in bad, in sickness and in health...), don't look for baby-faced brides, grooms, priests, brothers or sisters.
Posted by Father Jay Toborowsky at 11/17/2006