How Many Trees?, Holy Father, HOW MANY? 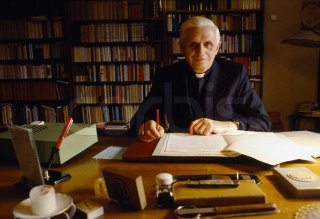 Stories are abundant in this morning's news that Pope Benedict's first book since his election is to be released in the spring. Volume One of "Jesus of Nazareth" will reportedly be a series of reflections on the life of Christ from his Baptism to the Transfiguration. During this past summer's stay in the Italian Alps and at Castelgandolfo, word was out that the Holy Father was putting finishing touches on a book.

Today's New York Times reports that Pope Benedict "has finished the first ten chapters of a longer projected life of Jesus." In the preface to the book (released by the Vatican), the Holy Father writes that the work is the fruit of a "long, personal journey" that began as a young man.

Of course, things are a little different for the pen of the prolific Pontiff. Now, when he writes (on matters of faith and morals, anyway) there's the whole question of Infallibility. Can a scholarly Pope go off on a theological tangent? Can he float a theory he has without intimidating theologians? Have no fear. B16 explains that the book is "solely a reflection of [his] personal research.", and then added, "Therefore, everyone is free to contradict me."

Another book? How much knowledge is in that mind of his? Will he ever stop writing? How many trees has this man been responsible for murdering just so he can keep Ignatius Press fiscally solvent?!? Stop writing, Holy Father, and give us all a chance to "catch up"!

Just kidding. Do what you want.

[WARNING: SHAMELESS SELF-PROMOTION FOLLOWS] I've just found out that the book I collaborated on, John Paul II For Dummies, is now available for pre-order on Amazon.com for delivery on or about December 18th. Bookstores won't have it in stock until after Christmas. Make it a Christmas gift for the YF in your life.
Posted by Father Jay Toborowsky at 11/22/2006