The Advent of "Advent"

December brings Advent, and Advent is one of those seasons that Priests hop from place to place assisting with parish penance services, conduct days of recollection, attend the Christmas parties of every parish organization, and generally fill their calendar with stuff until the afternoon of Christmas Day, when we all collapse after that last Mass on 12/25. But be not afraid. Generally by Christmas evening, we've made a full recovery and most are ready to spend the next 5 days recovering from their absolute fatigue by going on vacations filled with non-stop activity.

Especially during Advent, I try to get the radio show episodes done early in the month, and yesterday I taped two episodes. The first was on the Death Penalty and our Catholic response as we advocate a "Culture of Life". Two guests were on: One, Celeste Fitzgerald, is working on the grassroots level in New Jersey to eliminate the death penalty. The other, Kirk Bloodsworth, was wrongfully convicted of a brutal rape and murder back in 1984. As science developed the ability to test evidence for DNA, he pushed for testing of the evidence that convicted him (which incredibly laid in a paper bag in the closet of a judge's chambers -- the gang on CSI would go nuts!). The tests proved he was innocent and he was released after spending 9 years in prison. He now works for an organization that lobbys state legislators to reconsider executions, for fear they could be killing innocent persons. 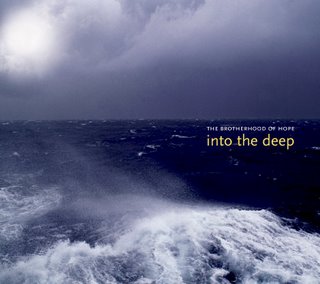 The second episode had a much more pleasant topic. The Brotherhood of Hope is doing excellent work since their start in New Jersey 26 years ago. Bishop John Smith, currently Ordinary of Trenton, brought them down to Florida State University during his previous assignment as Bishop of Pensacola-Tallahassee. Cardinal Law, during his years as Archbishop of Boston, met them while speaking at Seton Hall University's International Institute for Clergy Formation (the brothers lived in a house just outside a side gate of Seton Hall, and a conversation developed after Law was recognized by some BHs sitting outside while the Cardinal was out for a walk), and brought them up to Massachusetts, where they do great work at Northeastern U. and Boston University. Their most recent move was a return to New Jersey, where my bishop, Paul Bootkoski, invited them to work in campus ministry at the Catholic Center of Rutgers University. Anyway, the brothers have a new CD of music and meditations that are meant to get everyone to reflect on our vocation to holiness. I spoke to the Brotherhood's General Superior, Brother Rahl Bunsa, whom I've known for a few years. You can get the CD from the Brotherhood's website. The brothers also have a CD of purely Advent seasonal music, which you can also order from the site.
Posted by Father Jay Toborowsky at 11/29/2006