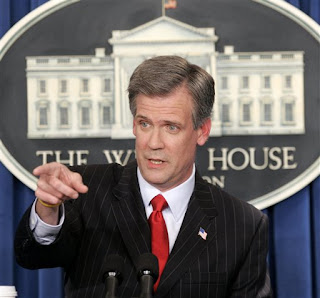 Tony Snow died this morning after a long bout with cancer, leaving behind a wife and three children.  He was only 53 years old, but had an amazing resumé which included work in radio, television, print, and service in the federal government as a speechwriter for one President the the Press Secretary for another.
Here's your homework for the weekend: flip the channels and see if the mainstream media gives Tony's life the same airtime they gave Tim Russert.  So far it is only Fox who is giving this serious coverage, though MSNBC is carrying the story.  Is a media personality's death worthy of airtime only if the deceased used to work for Democrats?
In the meantime, those who may be inclined to do something can click this link to the Colon Cancer Alliance.
Posted by Father Jay Toborowsky at 7/12/2008