Yes, we're used to him as the Holy Father, but even he gets to have a family vacation in which he gets to be a "little brother" again. Not since the pontificate of John Paul I have we had a Pope with living siblings (Papa Luciani had a younger brother and sister).  For the record, Pope John Paul II had a brother, a medical doctor named Edmund, who died as a result of treating patients with Scarlet Fever.  He died in 1932, when Karol was 12.

The photo database of L'Osservatore Romano has these pictures taken today, as Pope Benedict enjoys his vacation in northern Italy with his brother, Georg (who is 3 years his elder).
Remember, these are not "publicity shots", per se.  L'Osservatore Romano also has the task of recording the Pope's schedule for the purposes of keeping a historical archive.  Those who have their photographs taken with Pope Benedict can order copies of the photos, but primarily those pictures are being taken for archival purposes, and not for the photographees. 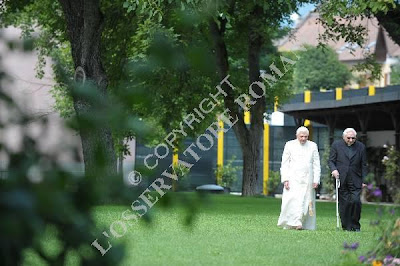 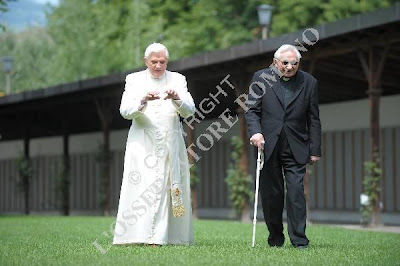 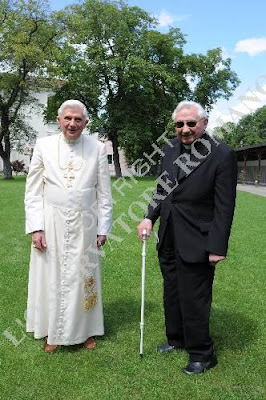 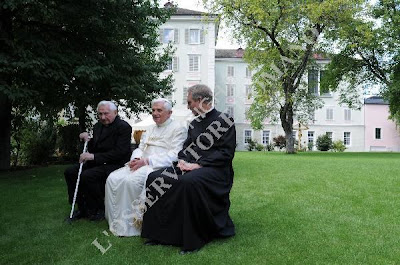 "Oooh, look at us,
ve look like an Oreo cookie!!"
NB - Also, fellow "carers of the minutiae" will notice that the Pope is wearing a cassock, and not his usual simar.  No shoulder cape or half-sleeves.  You can tell he's letting his hair down on vacation.  Can water balloons be far off?
Posted by Father Jay Toborowsky at 7/31/2008

Rev Fr.
Its definitely an oreo cookie, but do they have in Rome or Germany??