On Quarterbacks and Vocations

First, let me start with a disclaimer: football is not my strong sport.  But there are names you know that become bigger than the game itself, and Brett Favre is one of them. 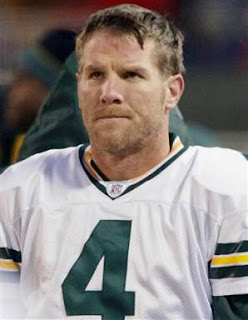 I've always had a soft spot for the Green Bay Packers, going back to the time when I was in the Boy Scouts, and my Scoutmaster was a genuine Green Bay fanatic.  Maybe it was natural; I mean, Vince Lombardi had his start in the NY metro area.  But whatever the reasons, we'd hear glory stories about Coach Lombardi as we were driven to camping trips in his beat up white car.
Last spring, Brett Favre announced his retirement from the NFL.  Here's video of the speech.  A very emotional moment, without a doubt, for Favre, his family and friends, Packers fans, and probably any fan of the game who watched his amazing career.
But now it's the mid summer, football training camps are about to start up, and Brett has changed his mind.  The Packers spent months coming up with plans for moving the team forward without Favre.  Now he has told them he wants to play again, and they're a little put off by it.  They still own his contract, and so right now, if Favre is going to continue playing, he has to play with the Packers, the team which he committed himself to by signing his name on a contract (and the Packers responded by giving him a lil' bit of financial compensation).
So now, Brett is singing this to the Packers.  Stay tuned for the saga to continue.
What is this doing on the blog of a Catholic Priest?  I bring it up because, like it or not, sports stars role models for society.  But perhaps they're also mirrors of our culture, as well.  Want to know why so many marriages end in divorce?  Or why so many young couples are NOT running to the altar and simply pretending they're married?  Or even why young men and women aren't giving their lives to God in the priesthood or religious life?  Our culture firmly believes that there is no such thing as the permanent commitment.
Was Favre lying when he gave his retirement speech?  Of course not; no one doubts his sincerity.  But now he thinks, "I used to feel that way, but now I feel this way.", and society applauds his decision to not live with the consequences of his actions.
Until we can restore personal integrity and the courage to live with our decisions, don't look for a lot of permanent commitments in our culture.  Yes, the Church still offers them in her vocations, but not a lot of fish are biting.
Posted by Father Jay Toborowsky at 7/15/2008

That's a unique take, and worthwhile.

BTW, while Lombardi and Favre are both Catholic, Favre's marital example should NOT be followed too closely.

You may wish to read "When Pride Still Mattered," an outstanding bio of Lombardi.