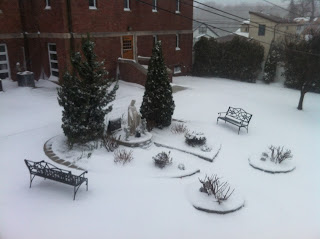 Snow finally caught up to us overnight.  Like others (especially Pastors), I had held out vain hopes that we'd get through a winter without any snow.  Don't get me wrong, it's pretty, it's scenic, it makes for great pictures (parents, get your kids out of bed, throw on their winter coats and send them outside, and go take your Christmas card picture for 2012!!!  You laugh now but you'll thank me next December).  Yes, an ontological change happens upon ordination to the Priesthood, we're all on the same page for that.  But something happens when you're a Pastor, a Rector, or anyone who has to keep to a budget. In the words of Ricky Ricardo, "Lemme 'splain":

OK, back to here.  I went over for the 8am Mass, not really knowing how many would be coming.  Only once in my time here have I had a Mass with no one present.  In all, 5 guys showed up (no, not the burger and fries people, though that would have been cool), including a seminarian who took it upon himself to shovel the front steps of church and lay down some salt - I love the zeal.

So what was the Gospel passage on the first snowy morning of winter?  Being the Feast of St. Agnes, I had the choice of the propers for her Feast Day, or the readings of the day.  When I saw the latter, I couldn't resist.  Mark 3:21 "...they said, 'He is out of his mind.'"  Your families, I told them, might have said the very things as you left in the snow this morning to come to Mass.  Certainly there must have been a few who thought young Agnes was out of her mind for not saving her own life by simply marrying the Roman Proconsul's son.  But there were undoubtedly those who saw her witness and became curious about Christianity.  Maybe they became Christians themselves, or maybe they just gained a new respect for Christians and their willingness to suffer for their beliefs.  Just like there may have been those in cars passing the church this morning, seeing the lights on inside (and maybe a person or two walking through the snow to Mass) and wondering why you'd do that?  We never know who we'll affect in life.  We never know who will see us in a random drive past.  But we do know God sees everything.  He saw Agnes give her life, and he saw you leave a warm house to come to Mass.

[I wonder how many people God is going to watch say, "It's too dangerous to drive to Mass", after watching the same folks spend the day driving their children to karate, dance, or go to the diner, the mall, or the movies?]
Posted by Father Jay Toborowsky at 1/21/2012

I'm usually one of those crazy people that gets to Mass no matter what. But I currently am getting used to having a brand new knee and I'm a little too anxious about going outside -- especially if we are getting the sleet they keep talking about (a Jersey girl here). I missed the 2nd and 3rd Sundays of Advent because of being in the hospital with said new knee. But this is the first snowfall and I really wish it would just warm up and be all gone by tomorrow morning. I'll venture outside this afternoon but if there is ice, I'm turning right around. And I'll go to confession next Saturday.

Ha! No measly little two inches was going to keep me from getting to Mass tomorrow morning. The car is all cleaned off and I hope she will still be that way at 6:30 am tomorrow morning. I thank you for the push, Father Toborowsky!