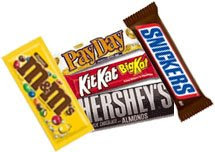 By now you've heard the story about the makers of such candy bars as Snickers that have announced that, due to the "wishes and comments we've heard from parents and consumers about health and wellness and options for their kids.", the candy manufacturer will no longer market candy bars to kids under the age of 12.

Are parents responsible for anything anymore? First, McDonald's was chided for serving hot coffee and making hamburgers, french fries, and milkshakes that are high in (brace yourself) fat! Now we've discovered that eating a lot of candy could be bad for childrens' waistlines. Is candy new? No, what's new is that childrens' entertainment is no longer to go out and play (thus burning calories using that metabolism that those of us over the age of 25 would kill to reclaim). Attention, concerned parents and consumers: Big Macs and and Baby Ruths are not the problem; the enemy is PlayStation and Nintendo (although the new Nintendo Wii does step out of that trap, requiring physical exertion as part of playing the game)! My summers as a kid were spent playing sports with my friends. Not simulated sports on a comupter, where my butt never left the couch, but actual sports that involved dirtiness and sweat (and a broken nose once, but that's another story).

Today's Gospel is from Mark 7, part of Jesus throwing the gauntlet down in the midst of experts in Judaic law who had come in from "home office" (Jerusalem) to confront him on his teachings. Jesus could have been speaking to the anti-candy lobby when he says that nothing which goes into a man from the outside can render him unclean, only what comes from the heart within. Eating a candy bar doesn't make anyone fat; deliberately deciding to eat 20 of them and then deliberately deciding not to burn some calories afterwards makes you fat.

I just bought a great magnet that says: "I didn't say it was your fault; I said I was going to blame you!" We hate taking responsibility for our actions. My weight is McDonald's fault, or the candy manufacturers fault, or my parents' fault. I got an "F" on my test because the teacher hates me. Our lives are filled with examples like these.

The first readings this week have been from Genesis. Pope John Paul II, in his Theology of the Body discourses, comments on today's passage, asking why God would put the "tree of the knowledge of good and evil" there in the midst of the garden, if it had the potential of causing trouble for man? His answer is that God's gift of our free will was already in place at creation, and that we would always and continually have use that free will to make a deliberate choice for God (talk 7.3, pages 154-155 in Waldstein's translation of the Theo of Body talks). The candy bars, the golden arches, etc., will always be there, right in our midst, calling out to us. We have to choose to say "no" (or at least say "yes" to some cardio workout after saying "yes" to some Chicken McNuggets).


We've all seen these kinds of signs at amusement parks. If society want 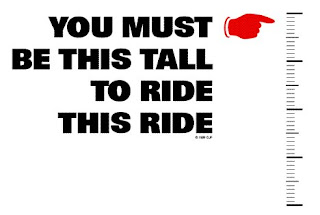 s to hold junk food makers accountable for the effects on their consumers, then give McDonald's or the local Dunkin Donuts the right to refuse to sell food to anyone they decide is too large. Let them have a sign that says, "You must be this thin to eat here."

Isn't the gospel great? No matter where you are in life, there's always something in it for everyone.
Posted by Father Jay Toborowsky at 2/07/2007