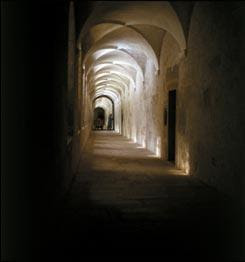 In 1984 a German filmmaker, Philip Gröning, saw the potential for a documentary on Carthusian life, and asked permission to film ordinary life over the period of one year at "Le Grand Chartreuse", the famed Carthusian monastery in France. He was told that "it was too soon", and, "perhaps in ten or fifteen years".

Finally, in 2000, the monastery contacted him, indicating they were ready to open their lives to cameras. They would allow only a bare minimum of a film crew, and the crew would have to promise to live at the monastery and join in the life of the monks for as long as they were filming.

Gröning and the crew agreed. Filming took place throughout 2003, and post-production editing took another two years. Last summer, Into Great Silence was released in Europe to fascinated crowds who could not imagine a life without the internet, iPods, fast food, and, obviously, talking.

The film is now being released in selected theaters throughout the United States. Locally, it'll be in Manhattan for a 2 week period. I'm going to try to break away to see it.

Check out the trailer for the film. Don't worry about subtitles. There's no dialogue.
Posted by Father Jay Toborowsky at 2/25/2007