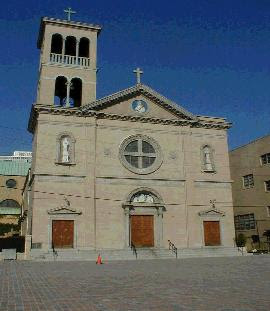 St. Lucy's is a parish in the Archdiocese of Newark, just a hop, skip, and jump from the Cathedral Basilica of the Sacred Heart.  A visit to the Basilica is a treat in itself, but if it also includes a stop at St. Lucy's, that's like the cherry on top of the sundae.  Click on this LINK to a photo of St. Lucy's interior, and you'll see what I mean.  This wasn't done with a marketing strategy by some consultants in a capital campaign; this was done with the nickels and dimes of immigrants.
Both Sacred Heart Basilica and St. Lucy's are examples of the artistic genius of Professor Gonippo Raggi, a native of Rome who made his home in New Jersey at the turn of the 20th century.  More of his work can be found at St. Catherine's in Spring Lake, as well as the chapel of Villa Walsh, the Motherhouse of the Religious Teachers Filippini.
But I digress.
The pastor of St. Lucy's, Msgr. Joseph Granato, has been there since 1955, when he was a curate to the legendary Fr. Gaetano Ruggiero. Having reached the age of 80, and after having received numerous extensions past the normal age of retirement from active ministry, the Archbishop of Newark has decided that Msgr. Granato should retire as Pastor of St. Lucy's.  Here's where the "he said/he said" fun begins.
Here's a link to an article in yesterday's Star Ledger.
Also, here's a link to a story that'll put St. Lucy's, Newark, and Msgr. Granato in a larger perspective.
Posted by Father Jay Toborowsky at 6/05/2009

Thank you for your support of my great parish and my magnanimous pastor Msgr. Granato's ongoing and now precarious tenure. He is truly a great man, priest, and gentleman, and he is showing it even now in this present challenge.