In the first quickie business trip of my life, I just returned (at 10am) from a 40 hour trip to Alabama.  The pictures were taken with my phone.
I arrived in Birmingham Airport at about 10:00 Sunday evening.  By 6:30am on Monday, I was outside the EWTN studios and chapel.  The last time I was here was in August of 2007, when Frs. Brighenti & Trigilio and I taped "Crash Course on John Paul II".  June is less humid than August (thanks be to God), which means I didn't start sweating until I was under the TV lights.  Here's the outside of the chapel. 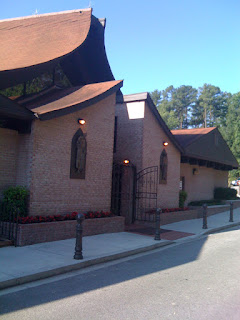 Most Catholics easily recognize the chapel from which the daily Mass is sent around the world.  But not many have seen the room where the Priest(s) vest for the Mass. 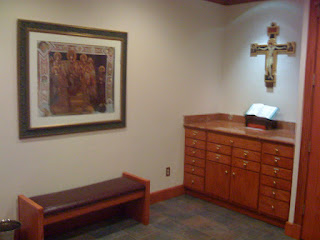 After the Mass and before the taping with Marcus Grodi, I had the chance to make another "pilgrimage" of sorts.
Some of you may have read the book, "Fried Green Tomatoes at the Whistle Stop Cafe", by Fannie Flagg (which was also made into a movie with nearly the same name in 1991).  The book was based on Flagg's aunt, who owned an eatery located alongside the railroad tracks in Irondale, Alabama.  Though it has different owners today, the Irondale Cafe still exists, and still offers southern culinary delights, including Fried Green Tomatoes.  I had to make a visit.
Here's the cafe and my lunch: 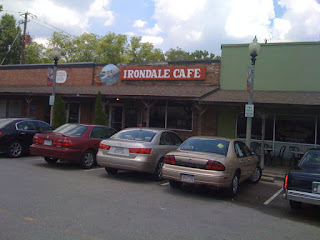 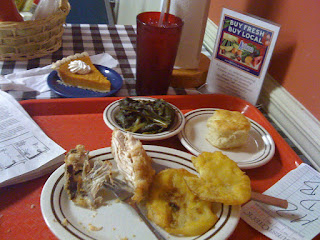 I had grits last time; I'm a pro at that. This time it was all about the tomatoes!