Archbishop Dolan’s motto is “Ad Quem Ibimus,” translated “Lord, to whom shall we go?” It is taken from the Gospel of John 6:68. This phrase, spoken by St. Peter to Christ, highlights our Lord as one true savior who alone has the words of everlasting life and commemorates the primacy of St. Peter and his successors among the apostles.
The archbishop’s personal emblem ... features in part the traditional coat of arms of the Dolan family. The shield is royal blue, with a silver horizontal bar, called a fess, across the middle. Placed in the center of the fess is a red crown, which is borrowed from the coat of arms of the Archdiocese of St. Louis, Archbishop Dolan's home diocese. The position in the center emphasizes the importance of the centrality of Christ in our lives and his kingship over all. On either side of the crown, in the fess, are placed natural scrolls. These items represent Archbishop Dolan’s baptismal patron, St. Timothy, a disciple of Paul and recipient of two of his pastoral letters.
Above the fess is a silver crescent, which symbolizes Our Lady of the Immaculate Conception, patroness of the United States. This is taken from the coat of arms of the Pontifical North American College in Rome, where Archbishop Dolan studied for the priesthood and served for seven years as rector. The other crescents are gold and are retained from the traditional Dolan coat of arms to honor his family, particularly his mother and father.

Oh, and lest you think that only the "eliteziest" bloggers were in Manhattan tonight in preparation for the announcement, perish the thought.
I, too, was in Gotham this evening, only in my case I was at Madison Square Garden for the Rangers/Maple Leafs game (thanks to the generosity of a parishioner). 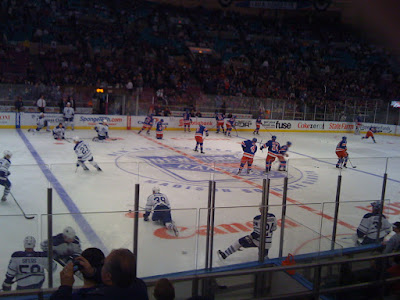 C'mon, MSG on the night they honor Andy Bathgate and Harry Howell?  An "Original 6" matchup with the Leafs wearing the retro jerseys?  Getting beer spilled on you by a drunk Gen-X'er sitting behind you?  Good times, good times.
Posted by Father Jay Toborowsky at 2/23/2009