The Paper Chase on DVD! 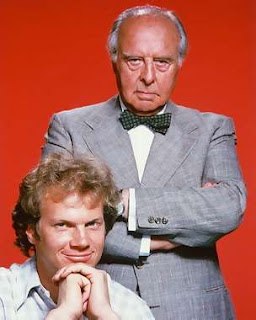 This morning I got an e-mail from Amazon.com that put a smile on my face.

Some of you may remember the 1973 movie, The Paper Chase, the story of first year law students at Harvard, and their incredibly tough teacher, Professor Charles Kingsfield (played by John Houseman, who won an Oscar for the role). I never saw the movie (in the early 70s, Mister Rogers Neighborhood was more my style).  But a few years later, while I was in high school, Showtime aired "The Paper Chase" the TV series!  They even had John Houseman come back to reprise his role as Kingsfield. It was right when I was facing some tough teachers who tested my disdain for school work, kicked my butt, and made me work my brain.  I instantly loved the show, which ran for four seasons and ended with Hart, Ford, and Bells' graduation from law school.  It even got me, for a little bit, to think about going to law school.

But back to the smile.   This morning's smile on my face came to me because the first season of that series is now being released on DVD.  It's due for release on April 7.  Yay!!!
NOW, for those of you who do remember the show and need more of a "fix", here's links to the show's theme music:
1st Season - opening theme
1st Season - closing theme
Seasons 2-4 - opening theme
Seasons 2-4 - closing theme
Finally, for those of you who don't remember the show, but whose interest is piqued, there's a clip on YouTube (which practically mirrors a scene in the 1973 movie).
Posted by Father Jay Toborowsky at 2/14/2009

Yay! I might just have to get the DVD. I spent a year of high school thinking I wanted to go to law school based on The Paper Chase. It was one of my favorite shows.

Awesome! I used to watch that show all the time when I was in high school. Thanks for the heads-up!

I don't know about the Showtime revivial but I remember when the TV show was on REGULAR TV on CBS...but I'm older than you.