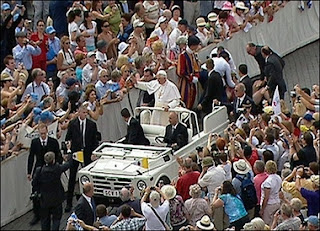 So a crazy guy gets tackled by plainclothes guardsmen (in nice Italian suits, I might add), and now the story is that Pope Benedict didn't react.

If you've ever gone to a Wednesday audience, you know that there's a clear difference between people before B16 shows up and after. Before Sua Santità arrives, people are pleasant and calm. But once the buzz starts (and, if you're in the Paul VI Audience Hall, the lights come on full-bright and the organ heralds his arrival), it becomes "every man/woman for themselves" in the attempt to shake his hand, capture his attention, or snap his picture. Yes, it's rather calm if you're sitting 4 rows deep into the crowd, because you know you've got no chance for some face-time. But for the brave who attempt to get their moment with Himself, it's become "Survivor: Vatican". The beauty of these general audiences is that the sections do not have assigned seats; the color of your ticket gets you placed into particular corrals. That means that anyone can get the aisle seat, as long as they're able to get to the audience before anyone else in their section. Pretty fair, eh?

Can you blame people? I mean, yes, on the surface there's the whole "You are Peter" thing. But beyond that, he's driving past soooooooooo nearby, and like the woman with the hemorrhage, we all start thinking, "If I could just touch the tassel of his garment." People in the front row understand this. They got to their seats bright and early and that makes it possible that they might have their 'handshake moment'. Believe me, In the audiences I've attended in my life, I've been crushed against the barricades and once even elbowed in the ribs by a 4'10" nun, who is probably otherwise a sweet and holy bride of Christ. As I learned, the problems don't come from the people on either side of you; the problems come from the folks behind you, who often stand on their chairs and treat the person in front of them as a step-stool in an attempt to move closer. Knowing that, it's not such a extraordinary thing for the guards (who see this frenzy every week) to see someone caught up in the moment to lose their balance and topple forward. The story isn't as much that Pope Benedict didn't react, but that the Schweizergarde assigned to protect him did react in a way that removed the threat and kept the Pope secure. Good job, fellas.
Posted by Father Jay Toborowsky at 6/07/2007