Scarlet Silk Out; White Wool In

A previous post here and elsewhere in the blogosphere predicted that the Holy Father would create new Cardinals in a public Consistory on the Feast of Sts. Peter & Paul. Today the Vatican announced that B16 will preside at First Vespers (aka Evening Prayer) at the Basilica of St. Paul's Outside the Walls on the evening of June 28th. Once again, bloggers and "Vatican experts" have been reminded that we're on the outside looking in, and ultimately we're just observers.

This one will be special, in that Pope Benedict will announce a special "Pauline Year" dedicated to the tenacious Tentmaker from Tarsus. Let's see if this special year "trickles down" to local dioceses better than Pope John Paul's years of the Rosary (Oct. 2002 - Oct '03) and the Eucharist (Oct. 2004 - Oct. '05). 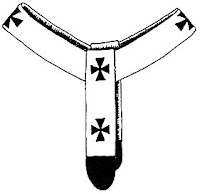 So while there'll be no red birettas handed out, on the next day, June 29, Pope Benedict will impose the white woolen Pallia on Metropolitan Archbishops who've been named since the ceremony the previous year. 9:30am at St. Peter's Basilica. EWTN will be showing both events, so set your VCRs. In the meantime, Wikipedia has a good little history of the Pallium.
Posted by Father Jay Toborowsky at 6/21/2007