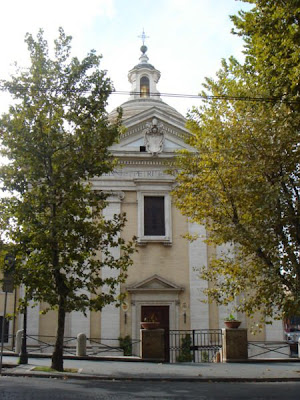 Today's Feast of Sts. Marcellinus & Peter (not that Peter) reminds me of another learning moment in my life.

It happened during my first trip to Rome while in the college seminary. I was part of a group of honors level college students (not that I was part of their honors program, but a few of the honors kids bailed out of the trip and myself and another seminarian borrowed money and took their places). We were walking along the street the Via Merulana between the basilicas of St. John Lateran and St. Mary Major, when we walked past this church pictured, the Church of Sti. Marcellino e Pietro. The names jumped out at me, not because I was any kind of astute church historian, but because I recognized the names as part of the list of names mentioned in the sometimes (and not often enough) used Eucharistic Prayer I of Mass.
My little "epiphany moment" was this: those names aren't just names thrown in to make the prayer seem longer and more reverent; they're real people. That's what I find so energizing about my trips to Rome: I grow in appreciation for not just the "biggie saints" because I visit the Mammertine Prison where Sts. Peter and Paul were kept, the monk's cell at Santa Sabina where Sts. Francis and St. Dominic met, the neighborhood where St. Philip Neri walked, or say Mass over the bones of Sts. Gregory the Great and Leo the Great, but for the lesser known, "optional memorial" Saints, like Sts. Clement, Frances of Rome, Camillus deLellis, John and Paul, Cosmas and Damien, Agnes, Cecilia, and, yes, Marcellinus & Peter. Now, when I use the first Eucharistic Prayer at Mass, they aren't just "names", they're memories of experiences I've had.
This was especially true of the Pope. At home, he's a photograph on the back wall of the Church, 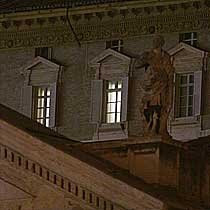 looking very posed and proper. In Rome, he's a man whose apartment I can point to. At night I can tell whether he's in his study or in his bedroom by the lights that are on. At an outdoor Mass or Audience, his hair gets messed up by the wind and I watch him sip a glass of water or wipe sweat from his face when dressed from neck to toe in heavy vestments. Once, after an Ordination to the Diaconate I attended at St. Peter's, I remember a young master of ceremonies trying to chase down Cardinal Ratzinger because he had left his glasses in the sacristy (how "regular guy" is that?). In short, our Church isn't just a bunch of policy statements and theories, it's people: People today who are the latest link in a chain that goes back centuries to people of the past (the Saints).
That's what Rome does for the Roman Catholic; it makes it "real".
Posted by Father Jay Toborowsky at 6/02/2007