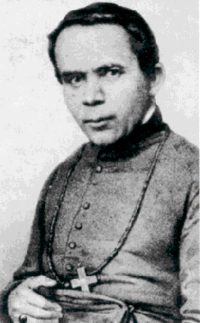 Today's Feast of St. John Neumann has special relevance here in New Jersey.
But just what part of the Garden State was Neumann the shepherd of?
The story goes like this:  Originally the American colonies were considered mission territory of the Diocese of London.  Then that little thing we like to call the "American Revolution" happened.  Following the establishment of the United States, Rome creates the Diocese of Baltimore in 1788 for the pastoral care of Catholic Americans, with John Carroll as the first Bishop.  By 1808,  the population has gotten too huge, and on April 8, Pius VII creates the Dioceses of Boston, New York, and Bardstown, whilst bumping Baltimore up to an Archdiocese (remember why Pope Benedict came to the U.S. last year?  It was for the bicentennial of that 1808 split).
So how was New Jersey affected?  The pastoral care of New Jersey Catholics was shared by the Dioceses of New York and Philadelphia, with the state split according to the original 1664 English colonial land grant to Lord Berkeley and Sir George Carteret, which created the territories of "East Jersey" and "West Jersey".  At first, this ambiguous division worked, since few Catholics actually lived along the east/west border; most were pretty clearly in the vicinities of either New York or Philadelphia.  But by the 1820s, the population of the central part of the state by Catholics begged the question, "Who's in charge here?"  The Papal Bulls establishing the Dioceses of New York and Philly were of no help; they simply referred to East Jersey being part of New York, and West Jersey being part of Philadelphia.  Eventually a bishop was dispatched from Rome to solve the dispute, and a line from Easton, Pennsylvania, to Little Egg Harbor, New Jersey, was defined as the diocesan border between New York and Philadelphia.  This was confirmed by Pope Gregory XVI in 1834, and remained this way until 1853, when Pius IX made New Jersey its own See as the Diocese of Newark.
What it means is that Neumann was bishop of a part of New Jersey for seventeen months, from the day of his Episcopal Consecration as Bishop of Philadelphia on March 28, 1852, until the Newark Diocese's establishment on July 29, 1853.  How much of New Jersey?  The entire modern day counties of Cape May, Cumberland, Salem, Gloucester, and Camden, and parts of the counties of Warren, Hunterdon, Mercer, Burlington, Ocean, and Atlantic.  Today, those counties make up all of the Diocese of Camden, and parts of the Dioceses of Trenton and my own Metuchen.
OK, enough history for today.
Posted by Father Jay Toborowsky at 1/05/2009

I guess we will have to wait until September 30th before we will see the rejoinder, "Hello, Jerry."

Wow! I am impressed by your historical knowledge. How did you figure out that mess?

Well, since you asked...

Msgr. Joseph Shenrock's "Upon This Rock" on the history of the Diocese of Trenton.