Today's feast day brings back a few memories.
First, it reminds me of the trip to Rome I took last January with a mixed pilgrimage group of current and former parishioners.  On one of our "walking tours" (they called them "death marches", but my term sounds friendlier), we stopped at the "Dodici", a.k.a. the "Church of the Holy Apostles".  In the lower church lies the relics of Sts. Philip and James, in a marble sarcophagus behind a grate.  Here's a photo one of the pilgrims took. 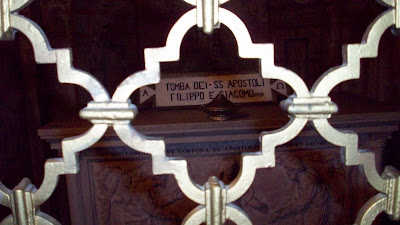 The second memory is also about a trip to Rome with my friend, Fr. Guy Selvester.  At the time of the trip, he was Parochial Vicar of the parish of Sts. Philip & James in Phillipsburg (the parish currently next door to me now, though I wasn't here yet).  While we were in Rome on that trip, he was able to obtain relics of Philip & James for his parish.  I'm guessing they have them out for public veneration today.
Finally, that Church of the Holy Apostles is the place where, on top of the relics of Philip & James, Bishop Vincent Breen was ordained to the Priesthood, while a student at the North American College in Rome.  Bp. Breen was the Bishop that ordained me a Priest, so I've always had a soft spot for that church.  Also, this church is the titular of Giovanni Batista Cardinal Re, and I've been a "Re fan" since his days as Sostituto under Cardinal Sodano, at the time the Vatican Secretary of State.  Today, Cardinal Re heads the Congregation for Bishops, largely responsible for the vetting of candidates for the episcopacy.  So if there's anyone who needs some prayers, it's Cardinal Re.
That all being said, today is the first of our "First Holy Communions" in our little corner of God's vineyard.  I'll be honest, I dread First Communions.  They've become so much about everything else EXCEPT the fact that the children are receiving the Eucharist for the first time.  The church is downright noisy and far from a place of prayer, as parents, relatives, etc. chit chat to each other, eagerly awaiting the "show to begin".  The children have to process into the church with military precision.  The flashing lights of the cameras from adults make the center aisle of the church feel more like the red carpet of Oscar night.  They have to do all the readings, because somehow hearing the Word of God proclaimed with a cute lisp makes it more meaningful.  They have to sing a cutesy, obligatory song which cannot help but provoke applause for a "job well done".  I mean, did they sing a song at their baptisms?  Do we make newly married couples sing something at the end of the wedding (I mean before the reception, when the liquor has kicked in)?  Do new priests have to sing a song for the congregation after they've been ordained?  Then there's the flowers to their parents (some of whom haven't brought them to church in 5 years).  Now, tell me:  in the midst of everything else we've piggybacked onto the liturgical celebration of First Holy Communion in most parishes, do you think these kids have ANY time to reflect and ponder the Body, Blood, Soul, and Divinity of Jesus Christ which they are taking into them for the very first time?  I feel for Religious Ed Directors who would dare to begin to omit these things from the Mass.  It would truly be touching the third rail, as parents would complain that they've somehow taken the "special-ness" out of the day.
Now, lest you think I'm going to go over to church with a machete, let me give you the "rest of the story".  Yes, I dread First Communions.  But once we get into the Mass, and I see the looks of wonder on the faces of these children, I leave feeling optimistic.  I end up praying that their enthusiasm passes on to the grown-ups.
Posted by Father Jay Toborowsky at 5/03/2008

Speaking as a DRE to any other DREs - and pastors! - yes, you can change the attitude about First Holy Communion. The thing is, you just have to bite the bullet and do it!

I was sure many of our parents would balk at any attempt to re-center their dear little ones' Mass experience back on Christ. But with the pastor's strong support and a concerted effort to educate the parents as well as the children (this means making regular meetings with the parents mandatory as well, now THAT is what the parents will balk at!) about the meaning of the Mass throughout the year, it actually happened.

If you prepare them throughout the year, then when it comes time for the immediate preparation for the Mass of First Communion, just quietly prepare without some of the "extras" (like a zillion kids reading vague petitions, or bringing up numerous different "meaningful" gifts at the offertory... those are what we had going on at my parish!). Then at the parent meeting immediately before the Mass, when "tasks" are usually assigned (at least that's how we did it) just explain that this year, because there are so many children, it was felt that it would be unfair to have some of them assisting at Mass and others not, and (more important, to you) that it was felt by you and Fr. that we would like to ensure that our children, who have worked so hard this year, can be fully a part of their special day with Jesus without being nervous or distracted by other tasks. If you get questions, just redirect them into a conversation about what the Mass truly is and how parents can best be present with their children to help them to encounter Jesus as beautifully as possible. Even those parents who are dying for those blasted photo-ops likely won't press the issue at that point. If they do, well, pray to the Holy Spirit and just stand firm, explaining that we must do what is best for the children and that means not giving them the impression that this is all a social event and a show but a beautiful experience of the Lord's mercy in giving us Himself. I've had to repeat that a bunch of times, but you know, it worked.

We did maintain the "lockstep" procession and recessional, but we helped give it a different feel by having the children carry white roses, and during the procession they brought the roses to place at the feet of Jesus and Mary (our two side statues). Next year we may do a consecration of them to Jesus through Mary before Mass begins as another way to emphasize that aspect of their relationship with Christ without interfering with the liturgy... The recessional was pretty simple, we just had the children come quietly up to the front of the church, bow with Fr. and the servers, and then precede Fr. out. They even waited quietly in the back of the church for their parents to come - all through Mass, actually, they were much better behaved than their parents & relatives visiting... God bless them!

If you have a school, get the school choir to sing at the Mass. That removes any need for the banal "showtune", and while the caliber of music overall may still be low - not because of the kids, I must add! - at least it's better than the processed mob of white and black who are forced into it.

Also, I would use parents or, better, the children's catechist(s), to read at the Mass; and use a few older siblings as altar servers and gift-bearers. This also helps to downplay the "we aren't participating anymore" perception.

This is why I can't stand First Communion Masses, which is sad, because as you say it should be an occasion of great joy. But you're absolutely right, Father: the Holy Sacrifice of the Mass should not be a "show."