Yes he did (again) 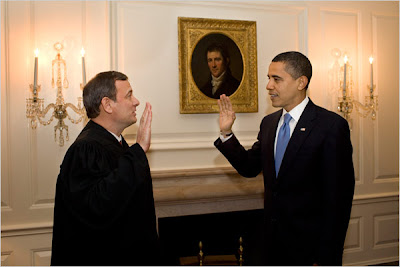 Photo: Pete Souza/The White House
In yesterday's blog entry about the oath of office being maimed by the heads of our nation's executive and judicial branches (and Lord only knows what would've happened if Congress got their hands on it), I wrote...

I'll make you a bet there's going to be a very quiet ducking into a small room in the Capitol, where he'll recite the oath again in its entirety.

Well, Drudge Report has this tidbit today about the scene at the White House last night:

At 735 pm, Roberts administred the oath of office again to Obama in the map room. Robert gibbs said the wh counsel, greg craig, believes the oath was fine Tuesday, but one word was out of sequence so they did this out of a "an abundance of caution." "We decided it was so much fun..." Obama joked while sitting on a couch. Obama stood and walked over to make small talk with pool as roberts donned his black robe. "Are you ready to take the oath?" Roberts asked. "I am, and we're going to do it very slowly," obama replied. Oath took 25 seconds. After a flawless recitation, roberts smiled and said, "congratulations, again." Obama said, "thank you, sir." Smattering of applause. "All right." Obama said. "The bad news for the pool is there's 12 more balls."