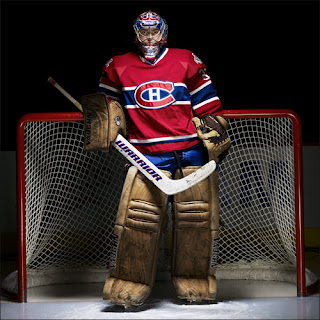 ESPN magazine's latest issue has a cover story on Carey Price, the Montreal Canadiens' number one goalie.
Because of his occupation to make "saves", and apparently because his last name has one syllable and a "hard I" sound, they've taken to calling him "Jesus Price".
It's an interesting story, showing how hockey in Quebec has pretty much taken the place of the Catholicism as the predominant religion of the people.  At the very least, out of the two choices, it's the one they're more likely to be proud about, defend the most vehemently, and even attempt to evangelize you towards.
Read the article by clicking HERE.
Posted by Father Jay Toborowsky at 1/16/2009

One of my French teachers in high school was an elderly sister who was a big Montreal Canadiens fan. When Les Habs lost, she was perhaps a tad grumpier the next day.

I'm a hockey mom (my oldest is now 22, plays on a men's league now and I'm headed to his game tonight). I can remember leaving school on a Friday picking him up at school and heading to Buffalo or Rochester or Toronto etc for a weekend of games. Many of my fellow teachers and friends thought I was crazy. I love hockey and as one of my son's coaches said it's not a game it's a lifestyle!! That being said I feel a little uncomfortable with Carey Price being called Jesus. He may be an awesome goalie and it is a high pressure position but......