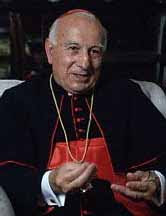 The announcement was made in Rome of the death of Pio Cardinal Laghi.
Laghi had been Prefect of the Congregation for Catholic Education from 1990 to 1999.  Before that, he had been both Apostolic Delegate and then (once President Reagan established formal diplomatic relations between the United States and the Holy See) Nuncio to the United States from 1980 to 1990.
Wanna know my "Pio Laghi" story?  I've got two, really.
The first one happened in my seminary days.  In September of 1995, Cardinal Laghi paid a visit to Mount Saint Mary's.  The Rector of the Mount, Msgr. Ken Roeltgen, wanted to host a lunch for the Cardinal, the faculty, and some seminary benefactors following Mass.  A few of us had already made a name for ourselves by doing some outrageous cooking in the community kitchen; you can only eat cafeteria food so many times a week. Msgr. Roeltgen ended up asking us to cook the lunch for the reception.  It was late summer, sweet tomatos were abundant, and so I made a 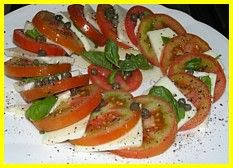 nice Insalata Caprese for everyone.  Though I was down in the kitchen and never saw it, I was later told that the Cardinal's face lit up when he saw the tomato, mozzarella, and basil salad.  Since then, "Cardinal Laghi" means "Caprese salad" in my brain.
Fast forward about 5 years for my second story.  I was in on vacation Rome with my pal Fr. Guy Selvester, who is the best guy (no pun) to have around if you want to spot a Cardinal on a crowded Roman street.  We were walking away from the colonnade of St. Peter's heading towards the Borgo Pio, when he says, "Hey, there's Cardinal Laghi!"  So we went over and introduced ourselves as Priests of the Diocese of Metuchen.  His face lit up as he recognized the diocese's name and said, "Ah, yes, you are a young diocese, but already on your third bishop."  Afterwards we marveled that, ten years removed as Nuncio to the United States, he could get approached out of the blue and asked a question about a diocese and he had something intelligent to say.
Cardinal Laghi's funeral is scheduled for St. Peter's Basilica on Tuesday.  Riposino in Pace.
(If the post's title confused you, in Italian, pio = pious and laghi = lakes.  So Pio Laghi = pious lakes)
Posted by Father Jay Toborowsky at 1/11/2009

I think the reason H.E. remembered the Diocese of Metuchen was that insalata caprese.