I'm sorry for going silent for the past few days.  A lot has happened.
A week ago I was told that the Bishop was reassigning me to be Parochial Vicar (aka "associate pastor") at the parish of St. Thomas the Apostle in Old Bridge, New Jersey.  I was not surprised that I was being moved.  I've been in Alpha for five years, which is a long time for a Parochial Vicar's assignment.  Still, five years at one place means that I've gotten to know the place pretty well, and leaving a parish and its people is something I haven't had to do for, well, five years.
In my Priesthood of ten years, joy and sorrow seem to come together.  Back in 2000, on the two year anniversary of my Ordination day, my father passed away.  Now, on the day of my ten year anniversary of ordination, I'm told of the transfer.  But THAT'S Priesthood!  Joys and sorrows, with a few moments of enlightenment along the way, all on the way towards the glory of Heaven.  Life's like a Rosary, eh?
It was with this information in my head that I headed into a pre-scheduled Mass and party for my tenth anniversary of Priestly ordination.  I decided that telling people about the move would turn the celebration into a wake, so I kept it from parishioners for the weekend.  What a great Mass and reception it was!  I tried my best to prepare everything for the Mass and reception (with the help of lots of people), but the one thing I did not think about was what to say at the end of Mass.  All that I could think of was the simple truth: the people who came out for my Mass, whether from home, from Basking Ridge, from Alpha, or from faraway places like the Archdioceses of New York and Washington, DC, humbled me by their presence.  Looking out in the crowd was like the last scene from Mr. Holland's Opus: a sea of faces, each one bringing memories from my past. Here are some pictures taken by a friend:

A close up of me, at the Gloria, I think. 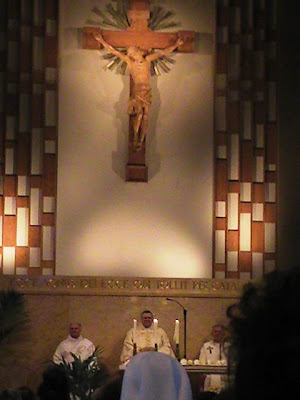 Seated during the readings. 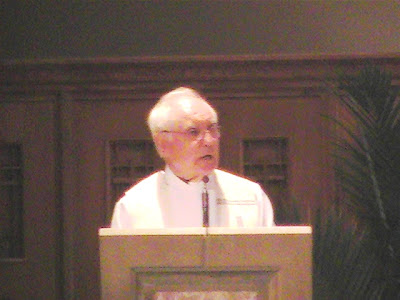 My cousin and first pastor, Msgr. Bill Capik, preached the homily.  What a great gift he has been to me these ten years. 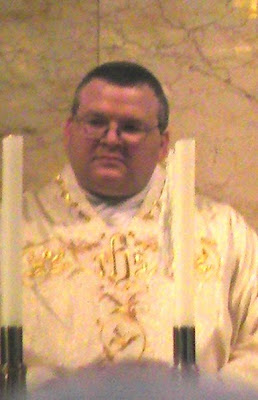 The vestment was a gift from the pilgrims whom I took to Rome back in January.  On the first night of the trip, they gave me a "thank you" gift and asked me to spend it on vestments.  I immediately thought of this Mass.  The chasuble comes from DeRitti's in Rome. 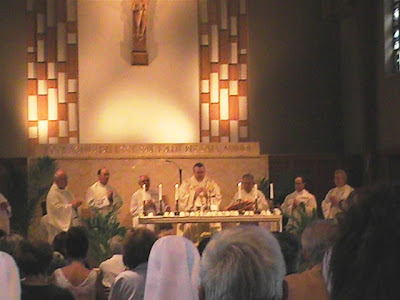 A group shot of me and the concelebrants.  Seven Priests joined me at the altar, while one attended in choir and another arrived late due to car trouble.  I'm grateful to them all. 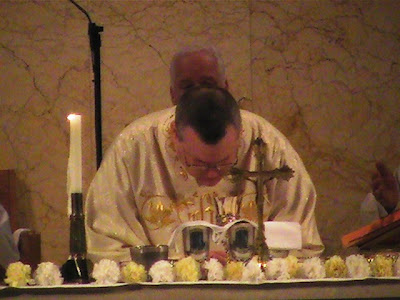 at the consecration of the chalice (Oh, and one of you could have told me that I'm getting a bald spot!)
But now the party is over, and the reality has set in.  A few scripture passages at Mass this past week have helped me out:
Wednesday's Gospel, with the Sadducees asking Jesus the loaded question about the woman who married seven brothers and whose wife she'd be at the final Resurrection, particularly helped.  To paraphrase it in my mind, I thought to myself, "If a Priest spends two years in College Seminary, then four years in the Major Seminary, then five years at one parish, then five years at another parish, whose Priest is he?  Is he a Seton Hall priest?  A Mount St. Mary's Priest?  A St. James Priest?  or a St. Mary's Priest?"  The answer is, "None of the above."  The Priest is Jesus Christ's Priest, and wherever Jesus asks the priest to serve, he should serve.  This is obedience to Christ, speaking to each Priest through the Bishop.
Today's Gospel helped me break the news to the daily Mass attendees.  For today's Feast of St. Norbert, the Gospel (from Luke)  had Jesus tell the crowd following him, "... every one of you who does not renounce all his possessions cannot be my disciple."  There are many things we don't think of as possessions: our health, our family, our friends.  One of the dearest "possessions" I have had for the past five years, I explained to them, has been this parish of St. Mary's.  Now, Jesus is asking me to trust him enough to "let it go".  Boy, I don't want to, but I know I have to.  I remember having the same feelings of dread (along with the accompanying knot in my stomach) with every change of scenery that I've had, going back to the day I left my home to go to the seminary.  God has been great to me thus far; I have no reason to believe he won't continue to do so.
The move doesn't take place until July 1st, so I have some time to start packing.  My emotions this week have been like a roller coaster: at times excited, at times scared.  Stay tuned!
Posted by Father Jay Toborowsky at 6/06/2008

Happy 10th Anniversary Fr. J. It was my 9th on Thursday. Memorial Day weekend I announced I was moving (as did justin and rupp). Moving and boxes will be all of our lives until the 1st week of July...