EWTN has been playing bits from the 49th Eucharistic Congress, being held in Quebec City.  The "Salt and Light" network, the national Catholic television network of Canada, has great people doing on-air translations of the largely French addresses.  What's bugging me is the "visual".  Let me explain:
Here's a photo of what people are seeing on TV.  What's wrong with this picture? 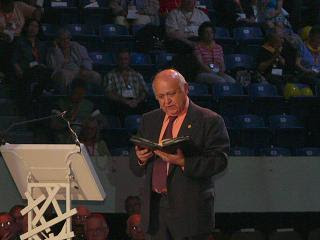 Give yourself a pat on the back if you said, "empty seats behind the speaker".
Ever see a speech on television by the President (or a candidate for President) in which there are people sitting behind the speaker?  You'll never see empty seats behind them; advance men have been fired over such things!  Empty seats become noticeable after the viewer looks at something for more than 10 seconds.  Their eyes naturally begin to wander toward the empty seats and their pretty blue color (or, "colour" in Canada).  Those hologram images (found on sale at kiosks in every mall in the known world) that contain "secret" pictures of dolphins or unicorns if you stare at them long enough operate under the same premise.  Whoops, went off the road there on a tangent.  Let me get back.
Empty seats send the viewer messages like, "This isn't important", or for a candidate, "He/she doesn't have enough supporters to fill seats, so why should I bother to care about what's being said?"  When that camera position was set up for the speakers' podium, those seats in that section in the back that are always on camera should have been designated as "must fill" seats. What does "must fill" mean?  It means that, no matter what the day's attendance is, those seats are always filled.  Give them all T-shirts and free sodas, whatever, but do what needs to be done to make the picture pretty.  Some may call that "deception"; I call it "positive reinforcement".
In the meantime, you can download English translations of the talks at the Eucharistic Congress from the Zenit News Agency web site's "documents" section.  In particular, here are direct links to the talks given by Archbishop Wuerl and Cardinal Rigali.
Posted by Father Jay Toborowsky at 6/21/2008

It's very likely that Salt n' Light were told by some Canadian Church flunkey where to put their cameras and have no choice in the matter. And the Canadian Church is notoriously blind to what we sometimes call the "optics" of a situation. They're hopeless amateurs, in other words.

Thanks for the posts on the Congress! I hope the Church in Canada gets a shot in the arm... they could sure use it! Then again, so could we!