"Remember [gulp] you are dust!" 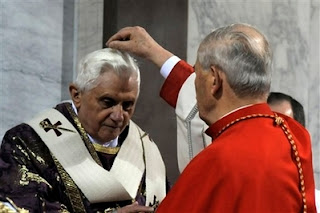 (AP Photo/Filippo Monteforte, Pool)
For those of you who either watched Pope Benedict's Ash Wednesday Mass from Santa Sabina on Vatican Television or EWTN, or perhaps saw pictures from the event in newspapers or on the internet, you saw the Holy Father receive ashes from Joseph Cardinal Tomko, retired Prefect of the Congregation for the Evangelization of Peoples (and the Cardinal whose titular church is Santa Sabina).

What's it like to impose ashes on the Pope? Cardinal Tomko was asked that question by L'Osservatore Romano, and the Zenit News Service translated part of the interview into English:

Like all Catholics, the Holy Father receives the ashes while the one administering them proclaims one of the two traditional exhortations: "Repent and believe in the Gospel" or "Remember that you are dust and to dust you shall return."

Both formulae are difficult to say to a Pope, Cardinal Tomko told L'Osservatore Romano. Referring to the first formula, the cardinal said the Holy Father "would have every right to say this to me and to everyone else. How can I remind the Pope of this?"

And it was particularly difficult to say the second "as John Paul II got older [...] It was like reminding him again what he not only knew, but felt in his body," the cardinal said.

"The choice has always been difficult. At times I have used one formula, at times the other. It is a very personal aspect, but also very significant because in whatever case," Cardinal Tomko added, "I must opt for a formula that is neither from the Pope nor from me: They are the words of God before which we should all bow our heads."

Ashes, like dust, "are a very eloquent sign of weakness, of sin and of the mortality of man," and to receive them one recognizes his limitation, the cardinal affirmed. Wealth, knowledge, glory, power, titles and dignities, he said, "do nothing for us."

The time of Lent "is directed toward the resurrection, and also our hope, which is not limited to this life, nor detained by our limits," Cardinal Tomko said, "but rather is based on eternal life that is assured for us by Jesus Christ through his death and resurrection."

And it is Jesus, affirmed the cardinal, who "asks three things of us in this intense time of the liturgical year."

He said Christ asks for almsgiving, "an expression of a more attentive generosity [...] of our love and respect for the needs of our neighbor and those who suffer"; prayer, "which flows from the heart more than from the lips"; and fasting, "sometimes of the body, although today it can imply many modern forms of renunciation." 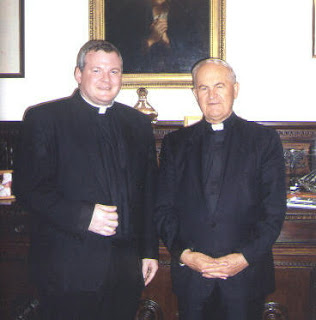 Last summer (when my diocese still had a radio show), I had the chance to interview Cardinal Tomko about a book he had written, called "On Missionary Roads" (available from Ignatius Press). You can hear the interview by clicking here. His English is excellent, and I was surprised to find out that he had actually visited my diocese a few times in the past, having a friend who was pastor of a predominently Slovak parish. I told him I'd be visiting Rome soon and asked if I could meet him. We had a great conversation on a rainy Rome day, when I was dying from a headcold and he insisted on feeding me a constant supply of orange juice and tissues. Being the groupie I am, I drank the juice and kept the tissue packet as a souvenir.
Posted by Father Jay Toborowsky at 2/07/2008