Those of you who know me know that I'm a big hockey fan. The story around the NHL today is about the injury suffered by Florida Panthers forward Richard Zednik. In a game last night in Buffalo against the Sabres, a teammate's skate came up during a fall, catching Zednik on his neck and cutting Zednik's cartoid artery. He was rushed off of the ice, and out of the arena to a Buffalo hospital, where surgeons closed the wound. He's resting comfortably in the hospital (the Panthers organization flew his wife up to Buffalo to be with him) and he's expected to make a full recovery.

So many people play hockey each day (myself included). I know the number of life-threatening injuries are relatively small. Sore muscles, middle of the night leg cramps, bruises, sprains, and yes, even the sports hernia, are all out there for the weekend warrior. But still, anytime you hear of something like this, you cannot but wonder how many times the potential for that kind of injury is present. So say a prayer for Richard Zednik as he recovers.
Now, on another topic. Back on January 12, I had the chance to participate in a hockey game played on the ice of the Wachovia Arena, home to the Wilkes-Barre/Scranton Penguins of the American Hockey League. Playing in a professional (albeit minor league) arena is one of those "fantasy moments" that a hockey geek like me rarely, if ever, gets to live out! Walking out of the locker room and through a dark tunnel that opens up onto an ice rink surrounded by seats (most of them empty, but still enough friends and family were there to cheer, boo, heckle the players, and take some photos) was absolutely one of the coolest things I've ever done. Some pictures were taken by spectators; here are the ones that I'm in:
Here's me wondering, "Where's the water bottle?" 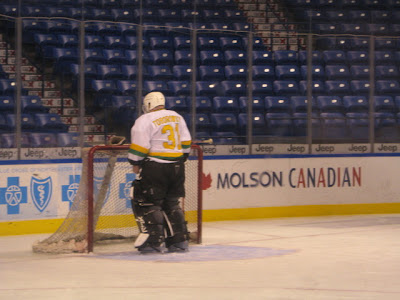 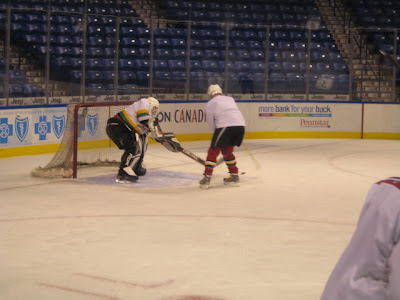 Ah, the money shot! Check out that extension on the blocker save (and notice the puck is outside of the net)! 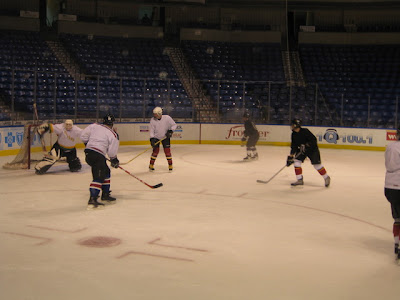 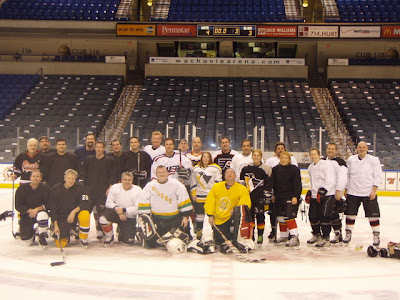 I was at the game. It was horrible. A miracle he didn't die on the ice. Blood was everywhere... more than they showed on TV. 17,000 folks went silent - most, I assume, uttering a prayer - even the unbelievers...

Talk about a Lenten message of putting life in perspective...