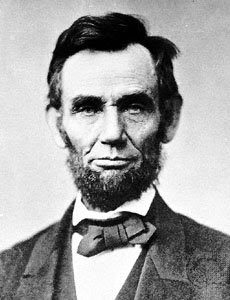 I almost said it.

I knew the readings for Mass this morning focused on prayer, and, today being the 199th anniversary of Lincoln's birth, I got the idea (exactly when all my best ideas come - 5 minutes before going over to the church for Mass) to tie in the need for prayer with something about Abraham Lincoln. So, entering the words, "Abraham Lincoln Prayer" on Google, I came across his 1863 Proclamation for a National Day of Prayer, which he hoped would beseech God to end the Civil War.

So, with all these things bouncing around my head, and a little bit under the weather, I went out for 8am Mass and almost said, "Today, the Church celebrates the Feast of Abraham Lincoln". Blame it on the Dayquil I'm taking.

Still, it has me thinking of our 16th President. I found this essay about the mystery of President Lincoln's religion. It comes from Dr. Mark Knoll, a professor of history at Wheaton College in Illinois:

Abraham Lincoln (1809-1865), sixteenth president of the United States, has become a mythic figure in America's civil religion. Born into relative poverty on the midwestern frontier, he rose from humble origins through self-discipline, honesty, common sense, a considerable measure of ambition, and a ready wit to shepherd the nation through the black days of the Civil War. After his death, Americans found it irresistible to see his achievement in a religious light. It was soon noted, for example, that Lincoln -- the "Savior" of the Union -- was shot on Good Friday (April 14, 1865), that his efforts to liberate the bondslave and bind up the wounds of war were cut short by "martyrdom," and that his very name -- Abraham -- spoke of the father of his people. Although Lincoln himself originally saw the Civil War as a political struggle to preserve the Union, he came to regard it as a crusade for truth and right. He spoke of the United States as "the last, best hope of the earth," of its citizens as "the almost
chosen people," and of the War as a test to see if a nation "conceived in liberty . . . can long endure."

Considerable uncertainty arises, however, when Lincoln's own religion is examined. On the one hand, it is obvious that Christianity exerted a profound influence on his life. His father was a member of Regular Baptist churches in Kentucky and Indiana. Lincoln himself read the Bible throughout his life, quoted from it extensively, and frequently made use of biblical images (as in the "House Divided" speech of 1858). It was said of him, perhaps with some exaggeration, that he knew by heart much of the Psalms, the book of Isaiah, and the entire New Testament. His life also exhibited many Christian virtues. He was scrupulously honest in repaying debts from ill-fated business ventures of the 1830s. He offered tender sympathy to the widows and orphans created by the Civil War. He pardoned numerous sleeping sentries and other soldiers condemned to death for relatively minor lapses. He kept his head concerning the morality of the contending sides in the War, refusing to picture the North as entirely virtuous or the South as absolutely evil. And during his years as president he did regularly attend the New York Avenue Presbyterian Church in Washington.

On the other hand, Lincoln never joined a church nor ever made a clear profession of standard Christian beliefs. While he read the Bible in the White House, he was not in the habit of saying grace before meals. Lincoln's friend Jesse Fell noted that the president "seldom communicated to anyone his views" on religion, and he went on to suggest that those views were not orthodox: "on the innate depravity of man, the character and office of the great head of the Church, the Atonement, the infallibility of the written revelation, the performance of miracles, the nature and design of . . . future rewards and punishments . . . and many other subjects, he held opinions utterly at variance with what are usually taught in the church." It is probable that Lincoln was turned against organized Christianity by his experiences as a young man in New Salem, Illinois, where excessive emotion and bitter sectarian quarrels marked yearly camp meetings and the ministry of traveling preachers. Yet although Lincoln was not a church member, he did ponder the eternal significance of his own circumstances, a personal life marked by tragedy (the early death of two sons) and difficulty (the occasional mental instability of his wife). And he took to heart the carnage of war over which he presided.

Whether it was from these experiences or from other sources, Lincoln's speeches and conversation revealed a spiritual perception far above the ordinary. It is one of the great ironies of the history of Christianity in America that the most profoundly religious analysis of the nation's deepest trauma came not from a clergyman or a theologian but from a politician who was self-taught in the ways of both God and humanity. The source of Lincoln's Christian perception will probably always remain a mystery, but the unusual depth of that perception none can doubt. Nowhere was that depth more visible than in his Second Inaugural Address of March 1865: "Both [North and South] read the same Bible, and pray to the same God; and each invokes His aid against the other. It may seem strange that any men should dare to ask a just God's assistance in wringing their bread from the sweat of other men's faces; but let us judge not that we be not judged. The prayers of both could not be answered; that of neither has been answered fully. The Almighty has His own purposes." Even more to the point was his reply when a minister from the North told the president he "hoped the Lord is on our side." Responded Lincoln, "I am not at all concerned about that. . . . But it is my constant anxiety and prayer that I and this nation should be on the Lord's side."