Today is the first Friday after Easter Sunday, and while technically it is the "Friday within the Easter Octave", I think of it as the first Friday that we Catholics can eat meat since before Lent. For those who didn't see it, check out my pre-Lenten blog entry. I was out for breakfast and treated myself to some bacon with my eggs, so I hope you treated yourself today! 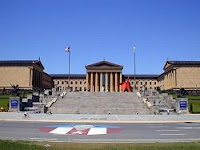 lphia Museum of Art. From my vantage point on the highway across the river, I still had a clear view of those steps made famous by Sylvester Stallone in a bunch of the Rocky movies. I could see people making their run up the steps, some on their own; others in groups of two or three. Yeah, I had my little fantasy moment of running up the steps with the Bill Conte music playing. But then it hit me: following in the footsteps of someone famous (albeit a fictional movie character) and applying his situation to your own life's situations. It was like all those step-runners were making a secular "Station of the Cross" in running up the museum steps! As they ran, in their own imaginative minds, they stopped being who they were and they were Rocky Balboa!

Sadly, this is also the first Friday in weeks that 99.9% of Catholic parishes will not have the recitation of the Stations of the Cross. Lent has come and gone, Easter is here, and this beautiful devotion of the Church has sadly become one of those devotions that gets put on a shelf along with the purple cloth and the sand and pebbles that liturgists stick in holy water fonts in an effort to be relevant and trendy. But if the devotion was only meant to be recited communally during Lent, why are Stations of the Cross permanent fixtures in our churches? In fact, anyone who has spent time in the sacristy of a church may have noticed a certificate on the wall (usually in Latin) which gave permission for the Stations of the Cross to be erected in that particular parish church. If anything, parishes should have the mysteries of the Rosary up on the walls of the church, since that seems to be a "year round" devotion.

I know having "post-Lenten Stations of the Cross" is a "chicken or the egg" thing for parishes. If my parish announced that we were continuing Stations after Lent, would people come? On the other hand, maybe the laity don't come out for the Church's treasured devotions because I don't provide them the opportunity? It's one of those things to think about. Many parishes still have novena recitations, such as the Miraculous Medal novena or novenas to particular saints. But what if parishes started having recitation of the Stations of the Cross either before or after Friday's daily Mass? It doesn't have to be an elaborate thing. In fact maybe it shouldn't be elaborate. This way we're considerate of the extra time involved, and it doesn't take too long. But also it would then make the Stations during Lent stand out more precisely because they are more elaborate.
Posted by Father Jay Toborowsky at 4/13/2007