30-Minute Catechumenate, Or Your Pizza is Free! 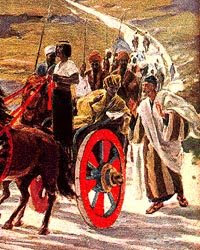 The first reading at today's Mass (Acts 8:26-40) tells the story of Philip's (that's Philip the Deacon, not Philip the Apostle) evangelization moment with the Ethiopian eunuch. Prompted by the Holy Spirit, Philip heads out on a road, chases down a chariot, "proclaims Jesus" to the occupant and does a quickie bible study, and baptizes the court official. That was easy, what's for lunch?

During Mass as this was being read, the cynic in me got the giggles. I kept imagining the "RCIA Shiites" who'd be complaining about how Philip violated protocols. "What? No 'Rite of

Acceptance' into the Catechumenate? No Scrutinies? No weeks and weeks of classes? No retreat day? You baptized him outside of the Easter Vigil? No godparents? Wrrronnnggg!" It seems to me that today it has become unthinkable that a Deacon or Priest could baptize someone without the help of a team of laypeople.

In the "life imitates art" department, I remember my classmate, Fr. Bailey Clemens of the Diocese of Baker, Oregon, (who, by the way, created and maintains a Catholic internet radio station called omegarock.com) told us a story of how, while he was a lay missionary in Africa, he was driving along when he passed a soldier who was signaling to him that he wanted a ride. Fr. Clemens had been told that you never give a soldier a ride, since there was always the chance they'd take the vehicle by gunpoint and leave you stranded. But this day, my classmate stopped. They started talking about religion, and the soldier indicated that he was unbaptized, but wanted to be a Roman Catholic. Fr. C. pulled off on the side of the road and, with the water in his canteen, baptized the soldier.

I suppose that today both Philip the Deacon and Fr. Clemens would have been directed to indicate to the person that when they got home they should contact their local Catholic Church and ask when the next RCIA classes would be starting up. But life was simpler, then.
Posted by Father Jay Toborowsky at 4/26/2007